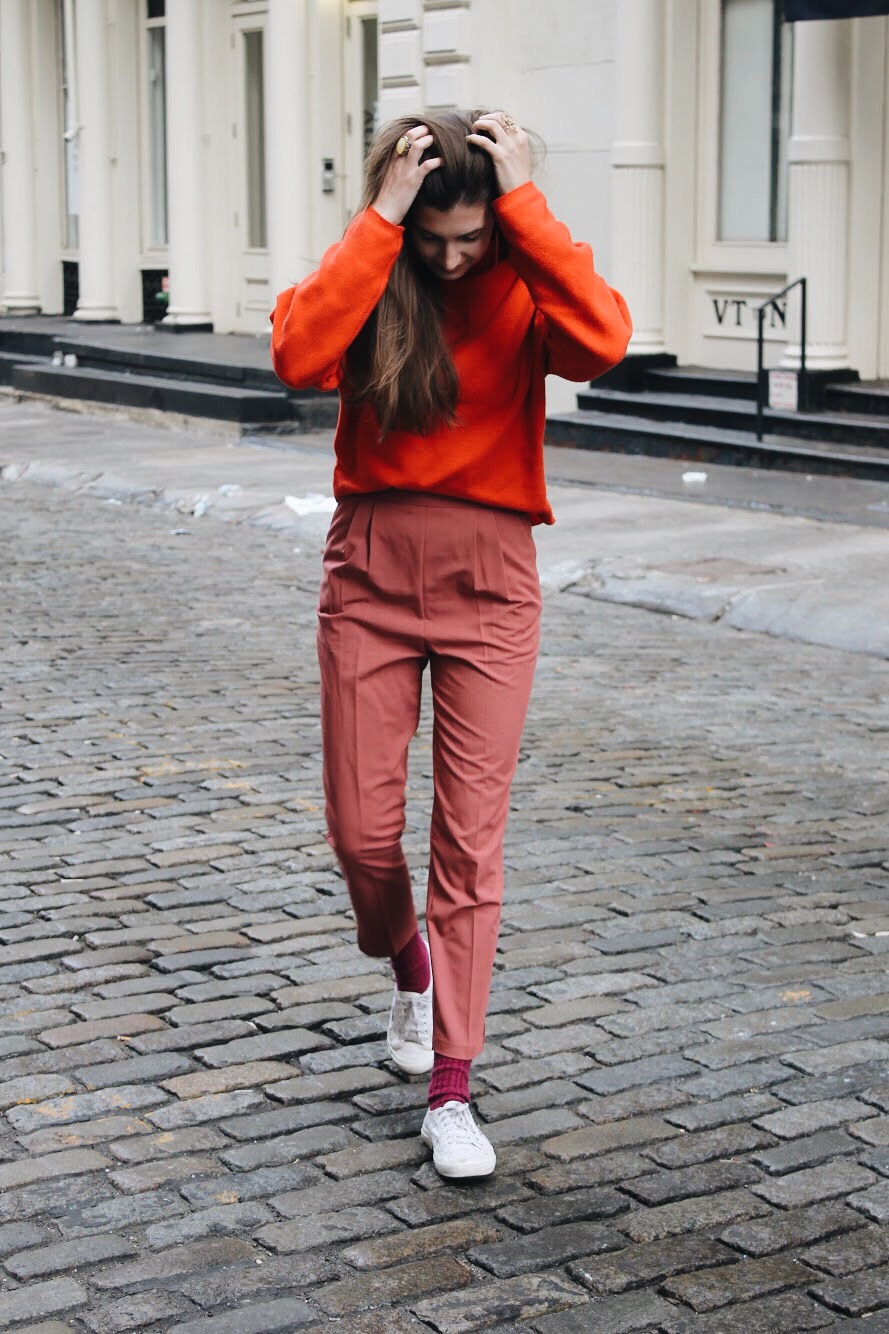 What do you think the thought process behind the above photo was?

If you guessed “hop on one foot, stare determinedly at the ground as though it were the math portion of the SAT, and clutch your hair in distress to mimic the feelings spawned by the “no calculator” portion of the exam”, you would be correct! There, an insight into the narcissistic world of outfit blogging. Sign up for my e-book/Instagram editing guide for more #insights and #behindthescenes! Link in bio. 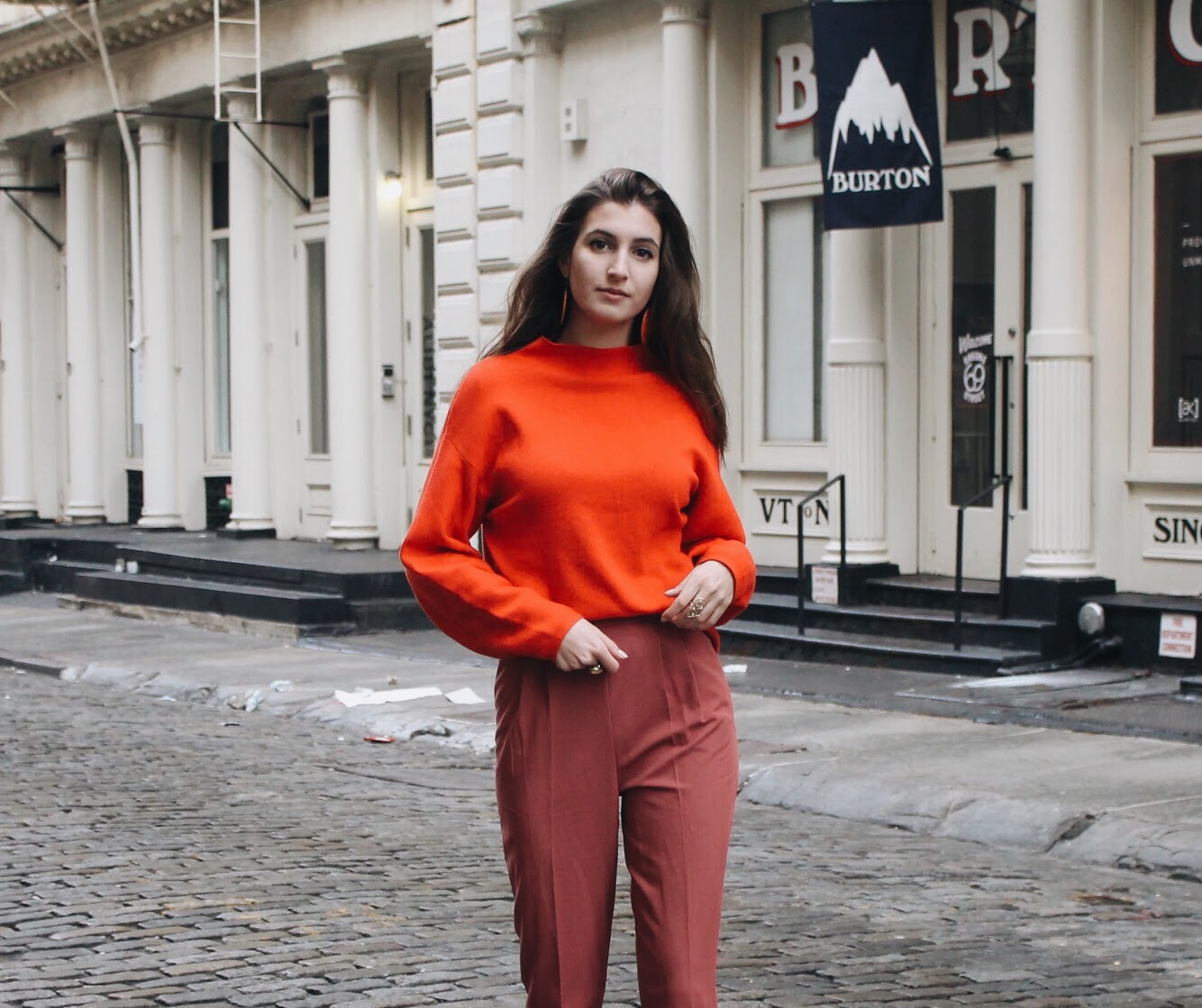 The impetus behind this particular ensemble was, at some point, the tonal blocking trend that may now be old news in fashion but is forever my favorite way to dress. Look here, my good man! And also here. God, I miss summer and my I’m-going-to-walk-from-Soho-to-the-UWS-every-day—era legs. 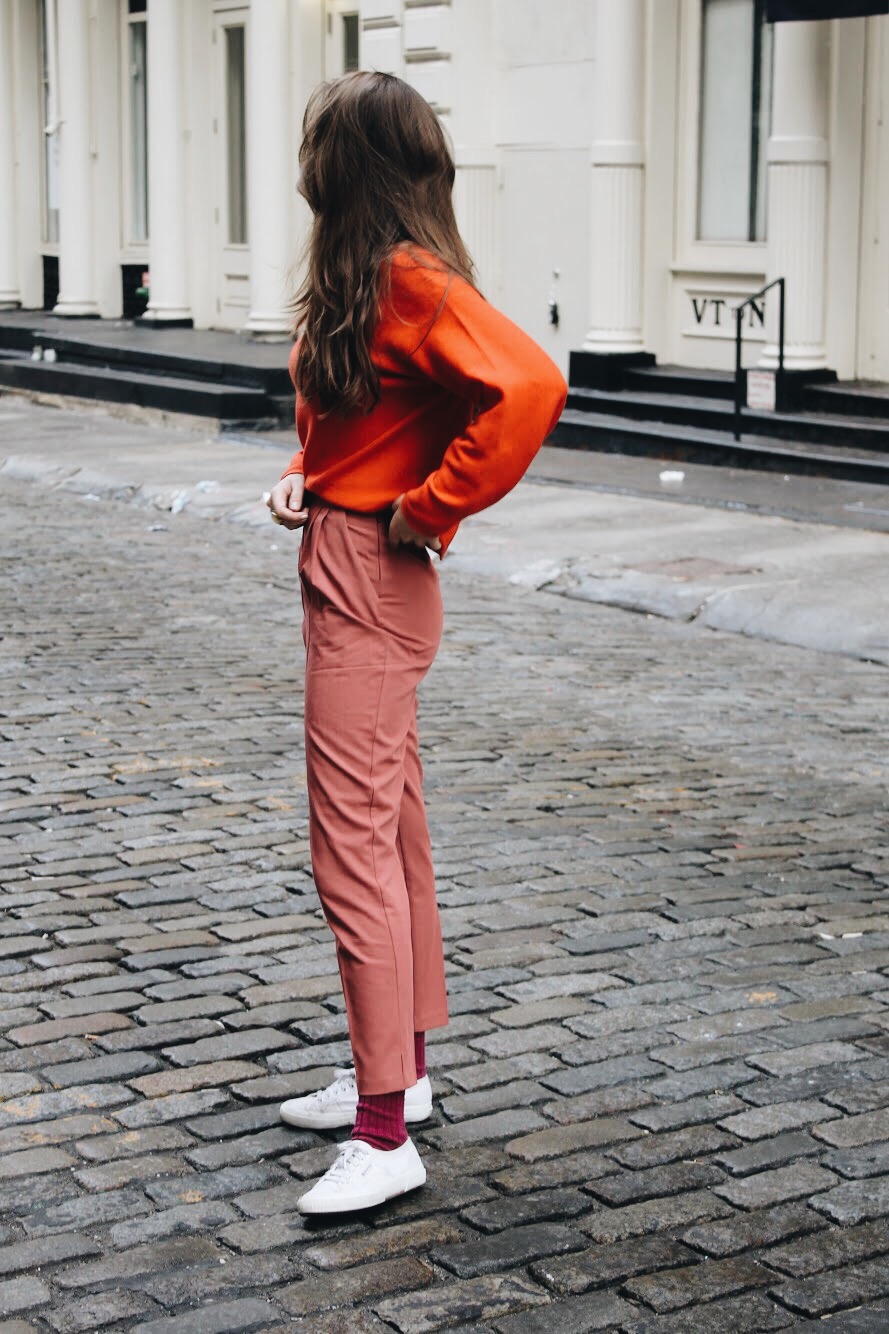 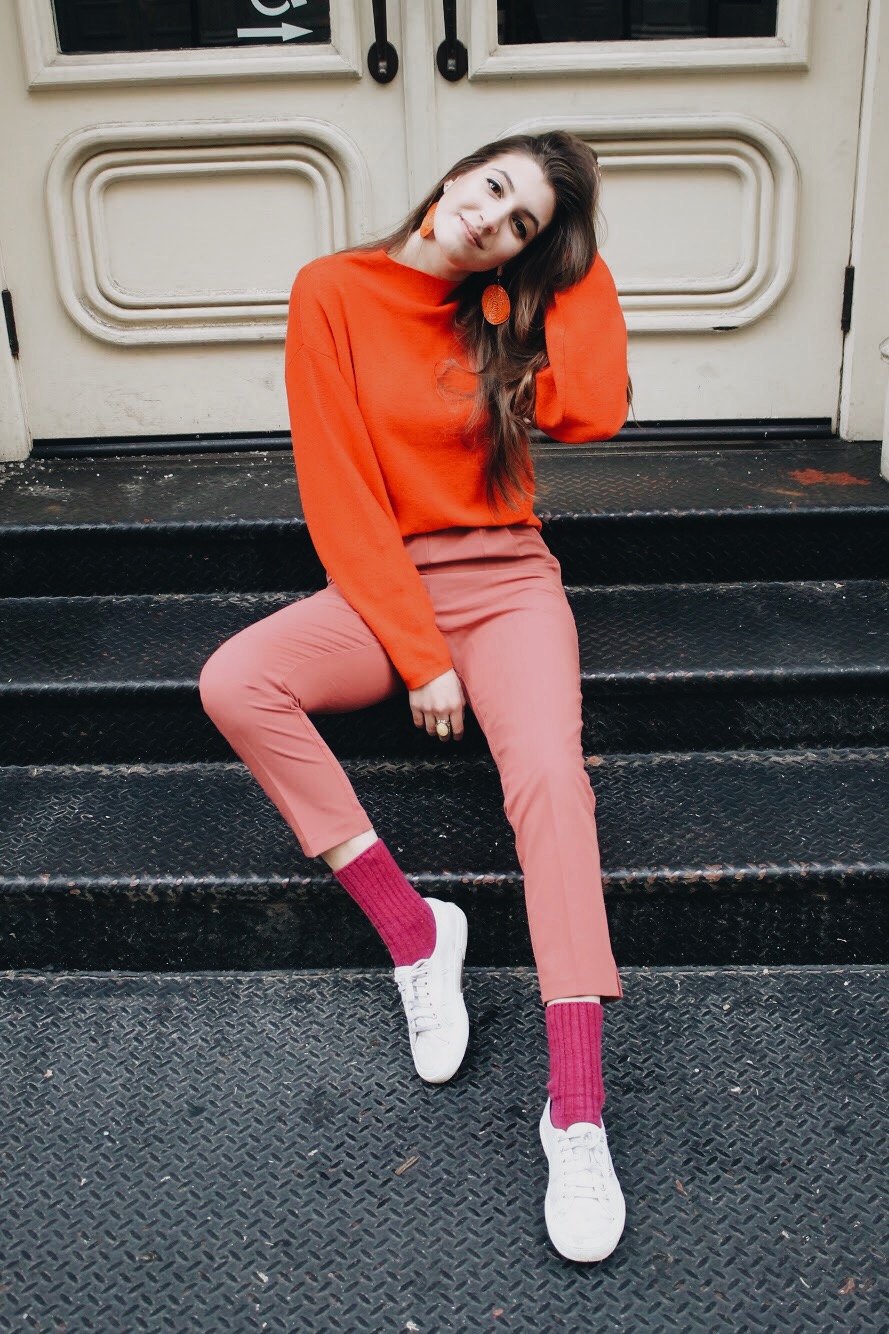 So it did start that way, as evidenced in my lower half with fuchsia socks and a blush (dare I whisper millennial?) pink set of trousers. The shoes were a necessary sacrifice, because I have neither the funds nor the closet space to introduce a pair of superfluous bright pink shoes into my wardrobe.

But if I did, I’d probably buy these Rag & Bone beauties. Or these upscale Euro-trash Adidas sneakers. 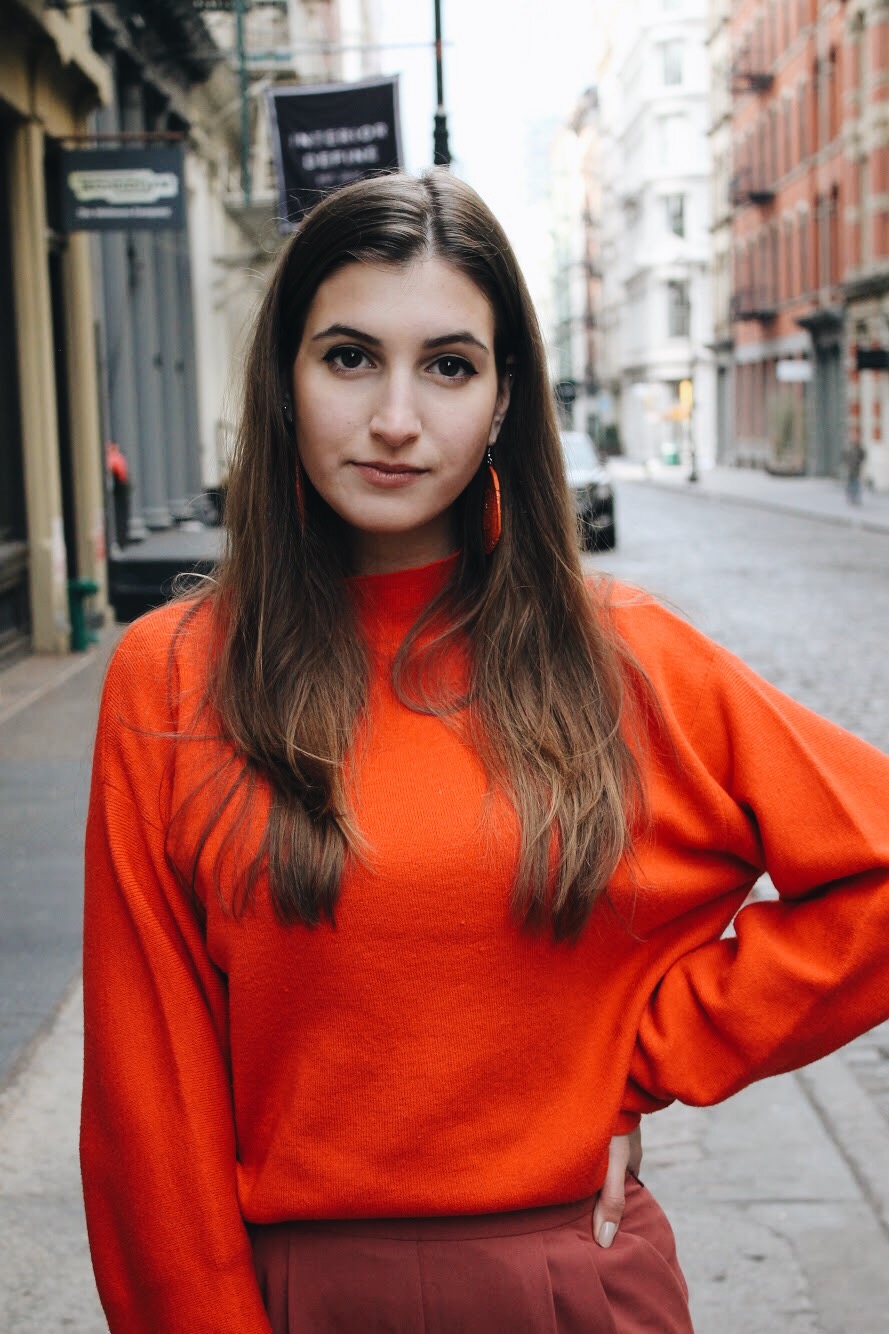 Things took a turn at the waist. This sweater—which in reality is a vibrant tomato red but is coming off more orange thanks to my horrendous overuse of a photo filter—ended up creating some variation of an ombre effect instead of full monochrome. I even finished off with orange earrings!

I am aware that I ended up looking a bit like an angsty crayon, traipsing around Mercer Street at 7 in the morning and demanding that my friend squat on the ground in order to accurately capture my ankles. But I rather liked the look, which is somewhat surprising (to me, at least, because I doubt anyone else is plagued by my sartorial choices) as it’s heaps bolder than I would ever dream of even a year ago. My former neutral-loving self is having convulsions. 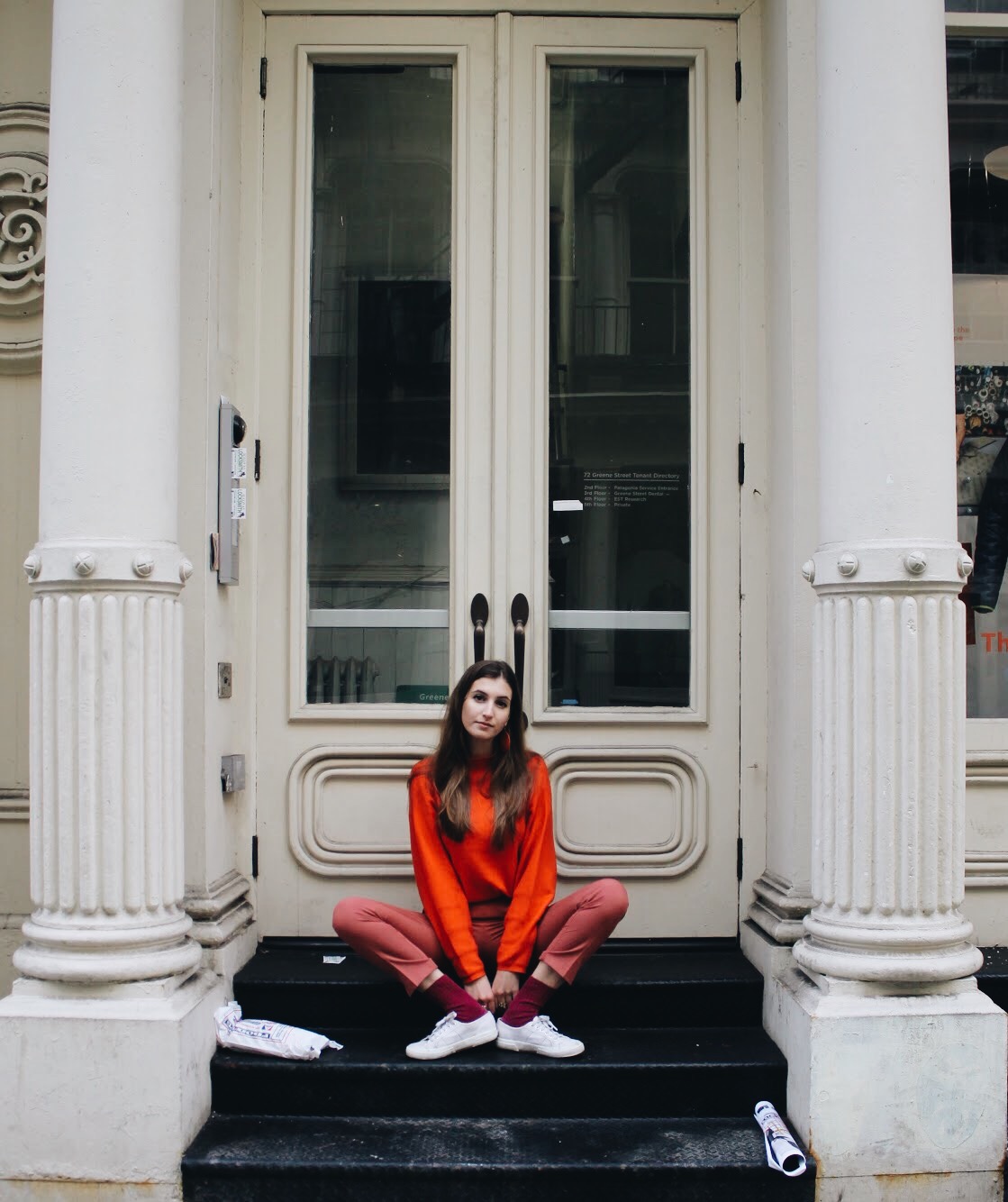 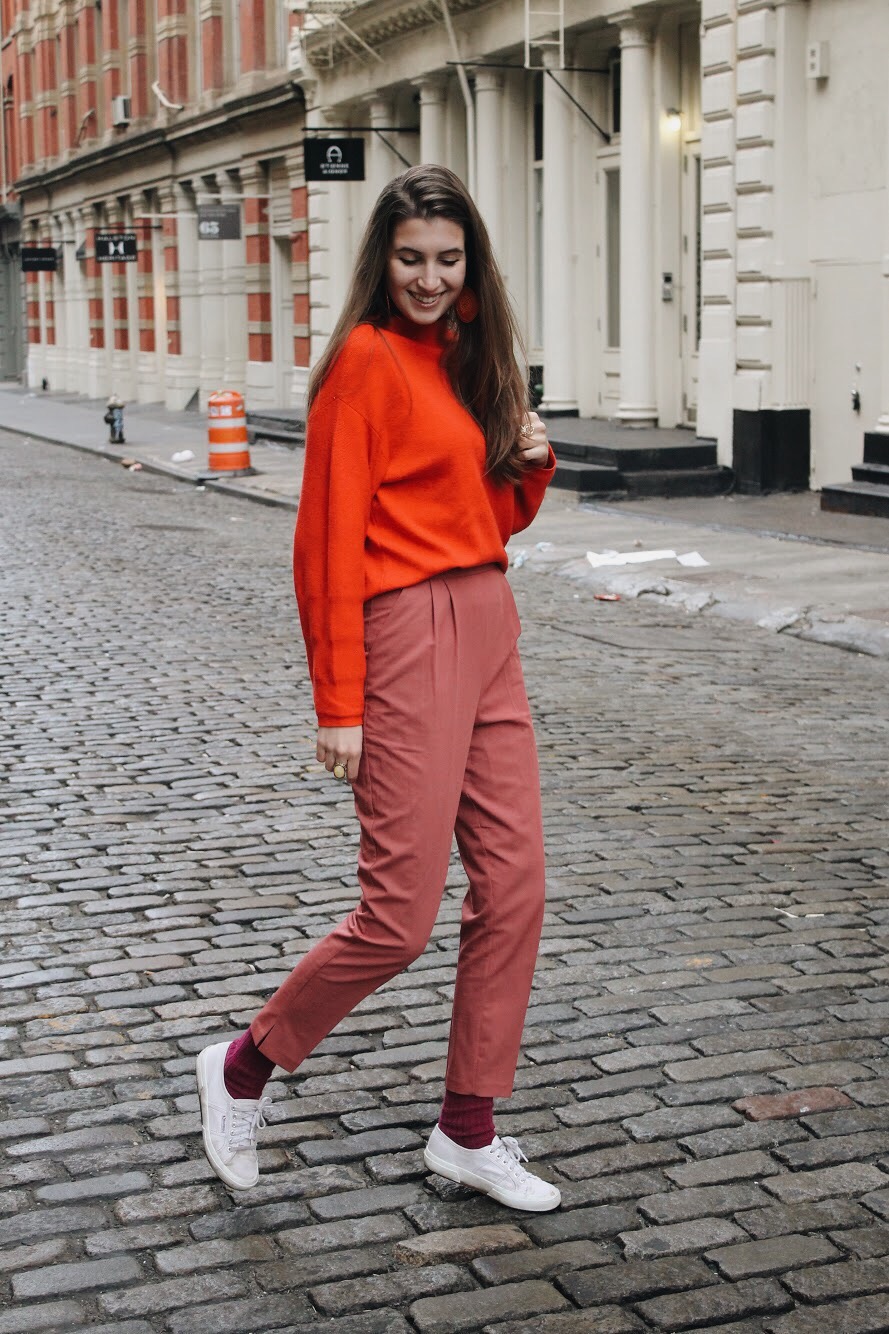 Which, when overanalyzed, may have something to do with geography. I didn’t grow up in New York. And while, except for a brief five-year stint in suburban America that I’m still trying to forget, I did largely grow up in urban places like London (the bougie part) and Rome, the uniform in those parts of the world errs much more on the side of subtlety. If I were to turn up to a Giant supermarket in suburban Virginia—which is really the only place worth visiting in such a locale—in a neon red sweater accompanied by bright pink trousers, the Lululemon-clad PTA moms would faint directly into the organic yams.

In New York? It’s boring! It’s minimalist! The kelly green coat adorned with peacock feathers is shaking its head at me in disappointment from across the subway platform! 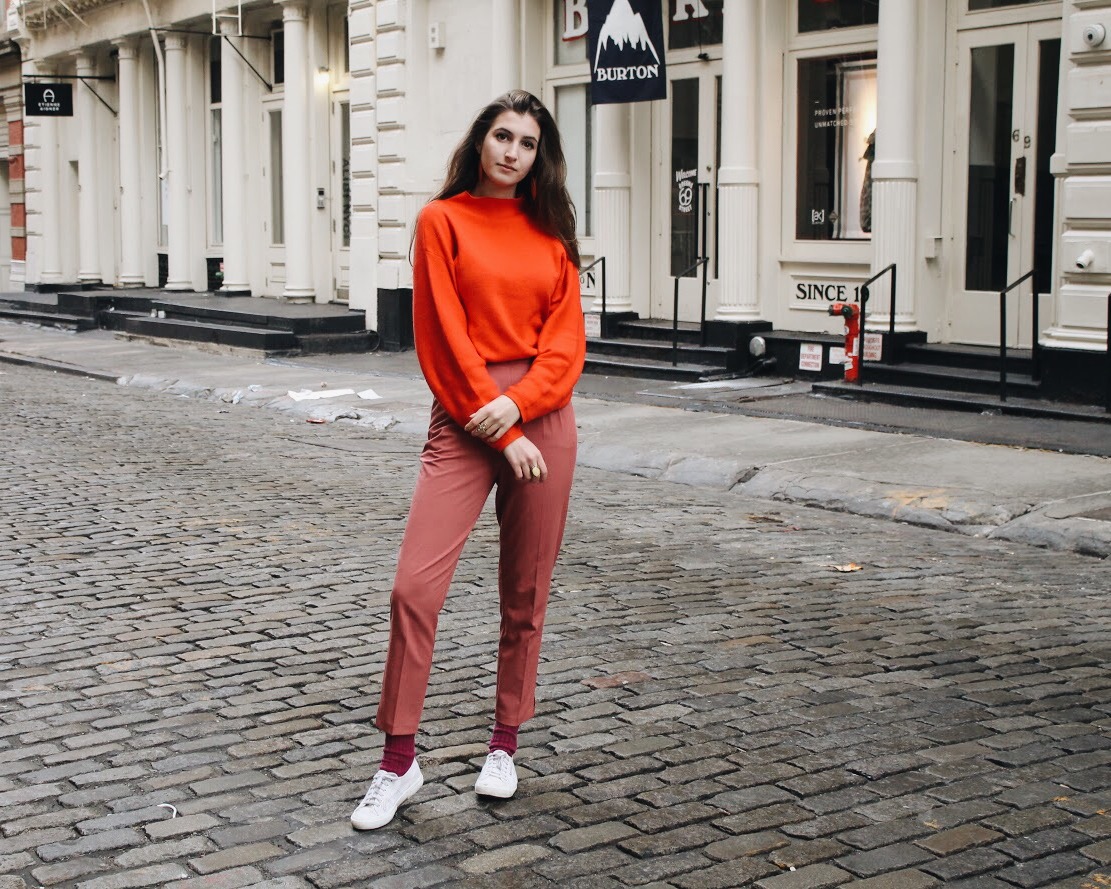 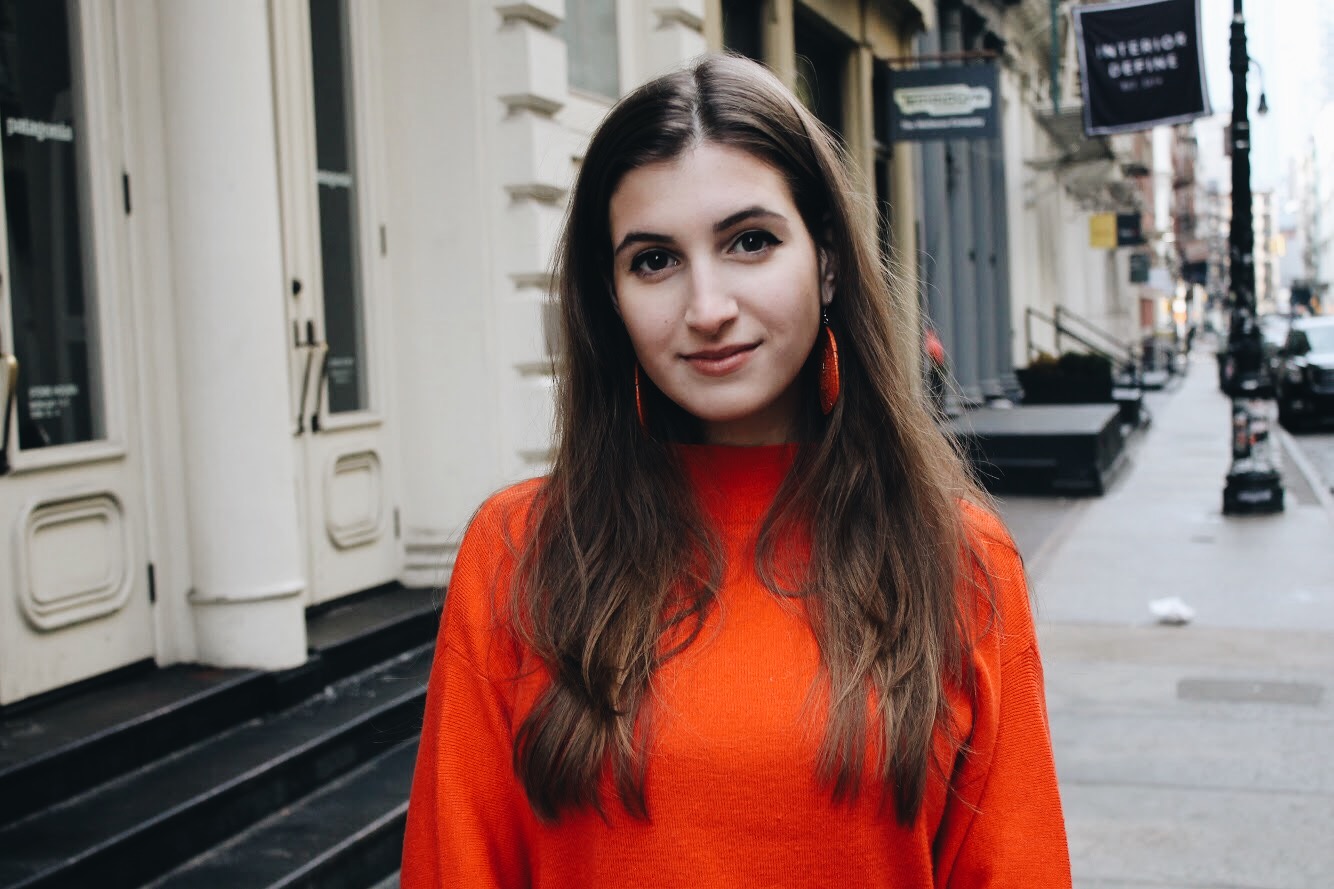 It dawned on me, halfway through walking around Soho looking like a human highlighter and turning nary a single bemused head, that my favorite thing about this city might be the fact that literally no one cares about what you’re doing or wearing, or how you’re doing or wearing it. There’s a freedom that comes with indifference. It encourages you to try new things without fear of looking like an idiot, to wear things you wouldn’t ordinarily wear, to indulge your most egomaniacal tendencies by standing in the middle of the street on one foot in pursuit of a photo.

Not that I’m saying that last bit is necessarily something to be encouraged, but still. New York is changing my style, and I’m here for it. Who knows? I may even venture into crocs. 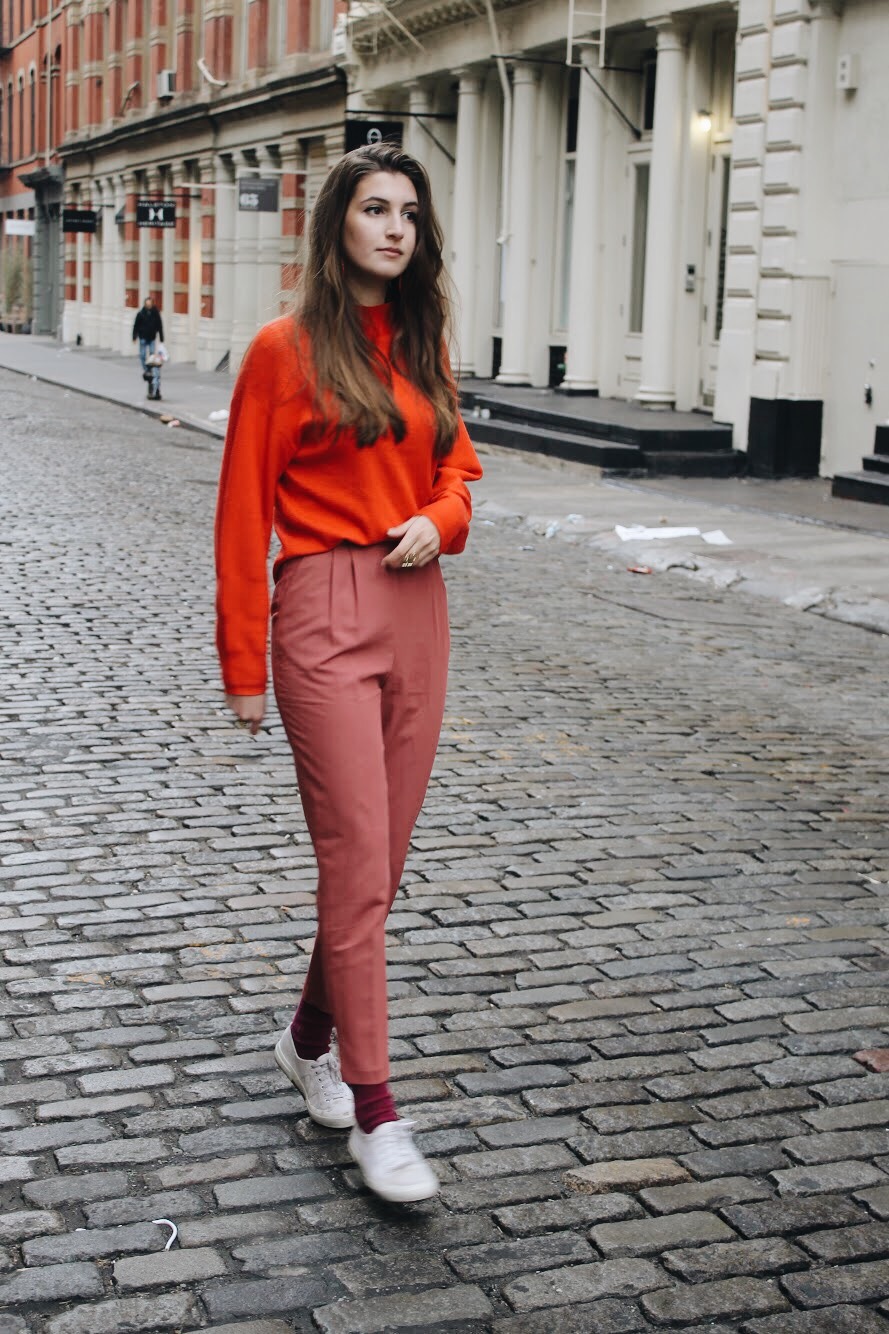 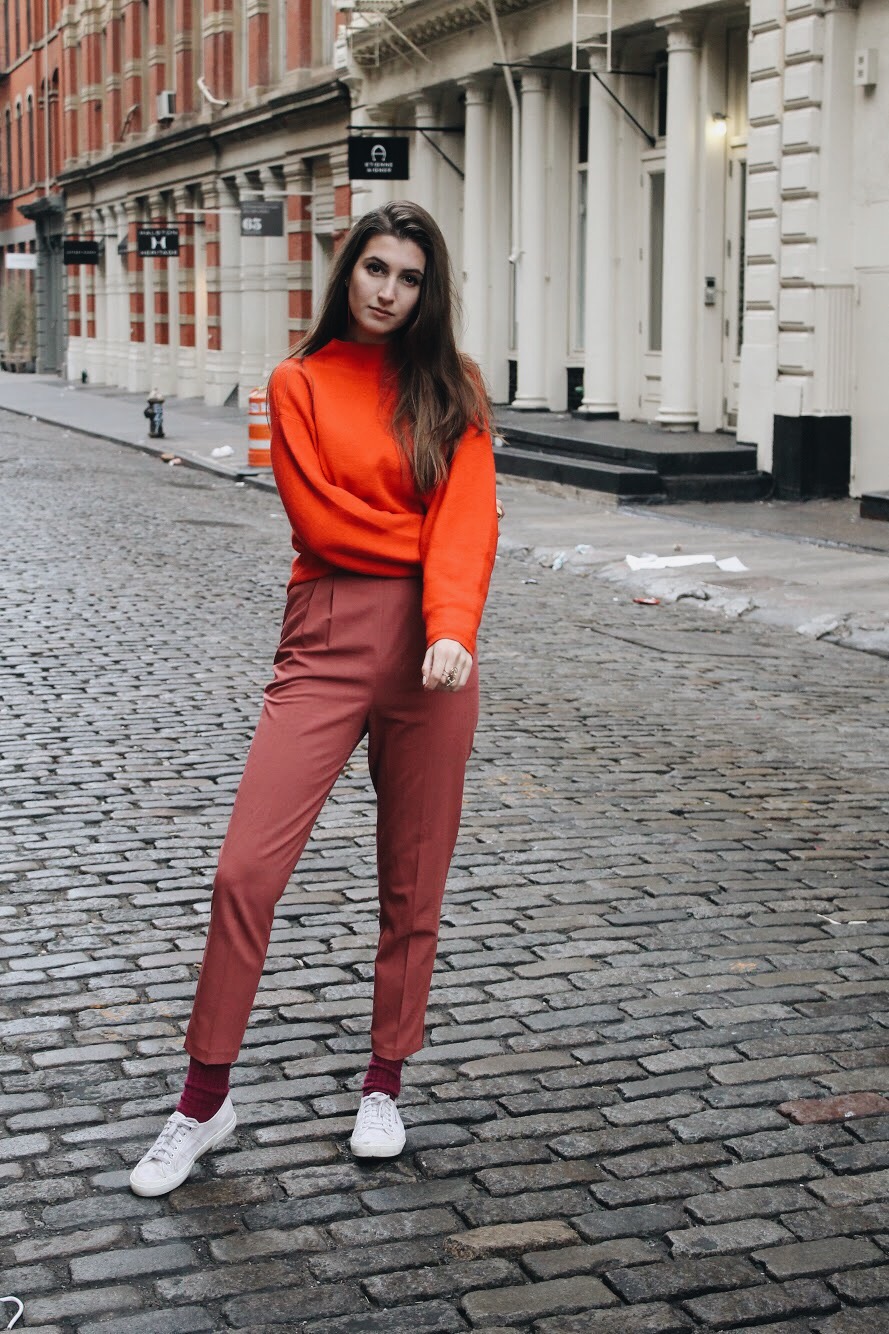 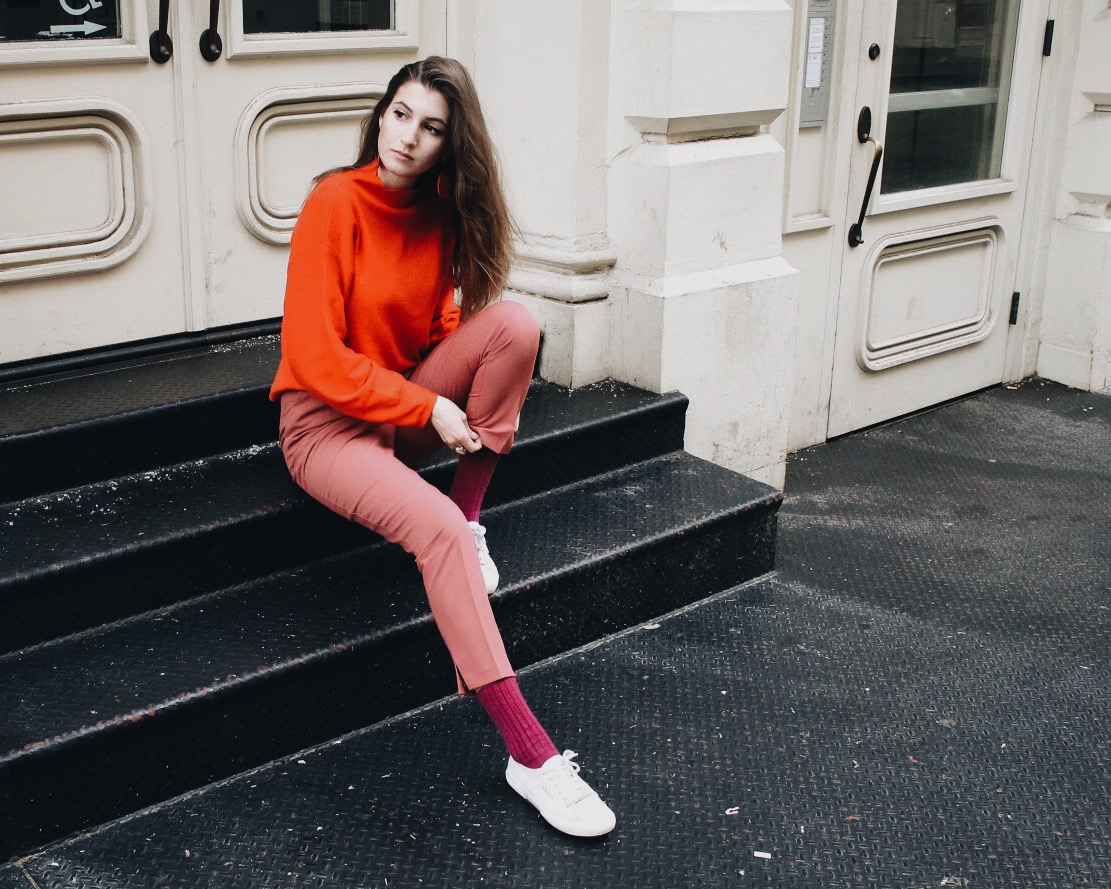 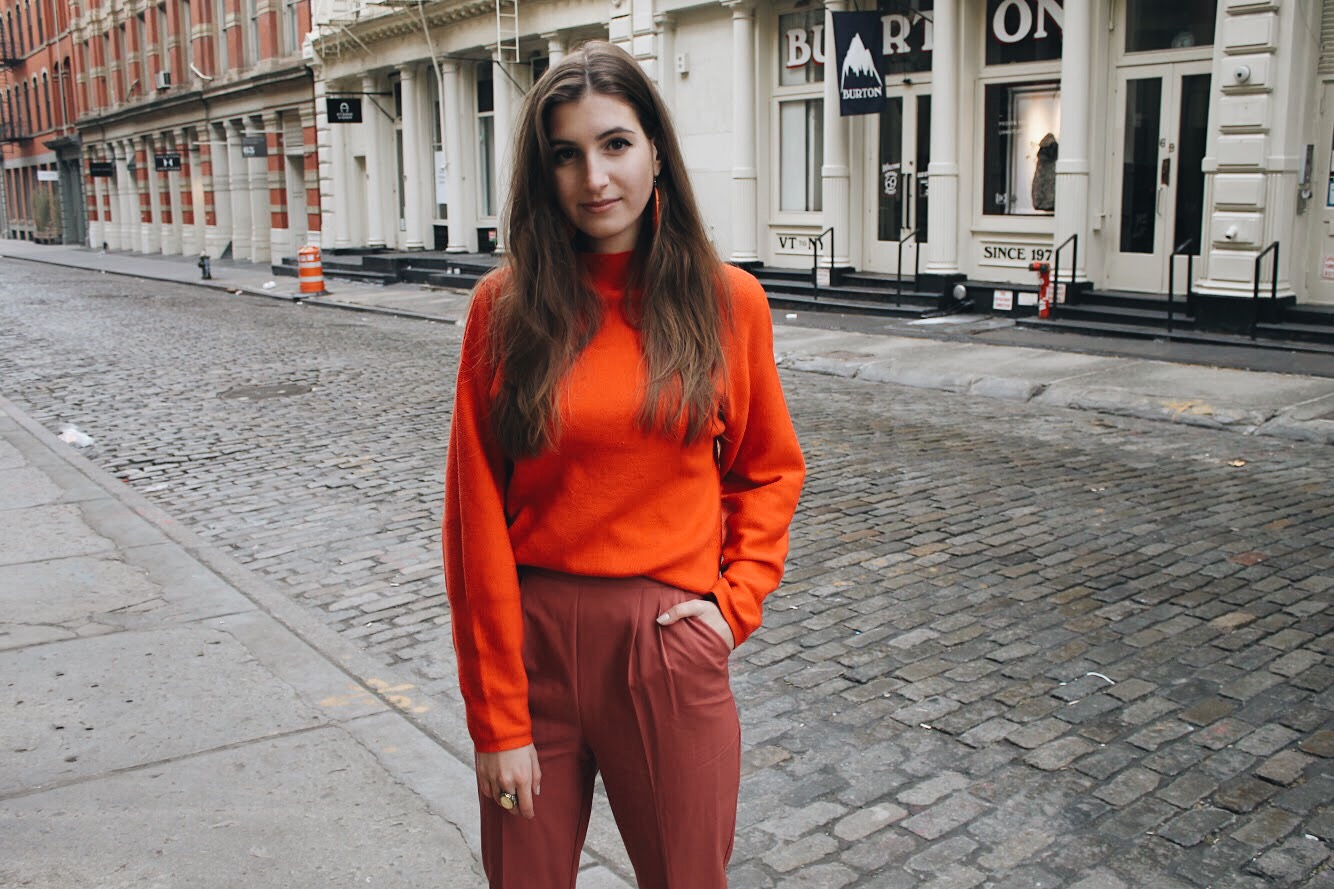