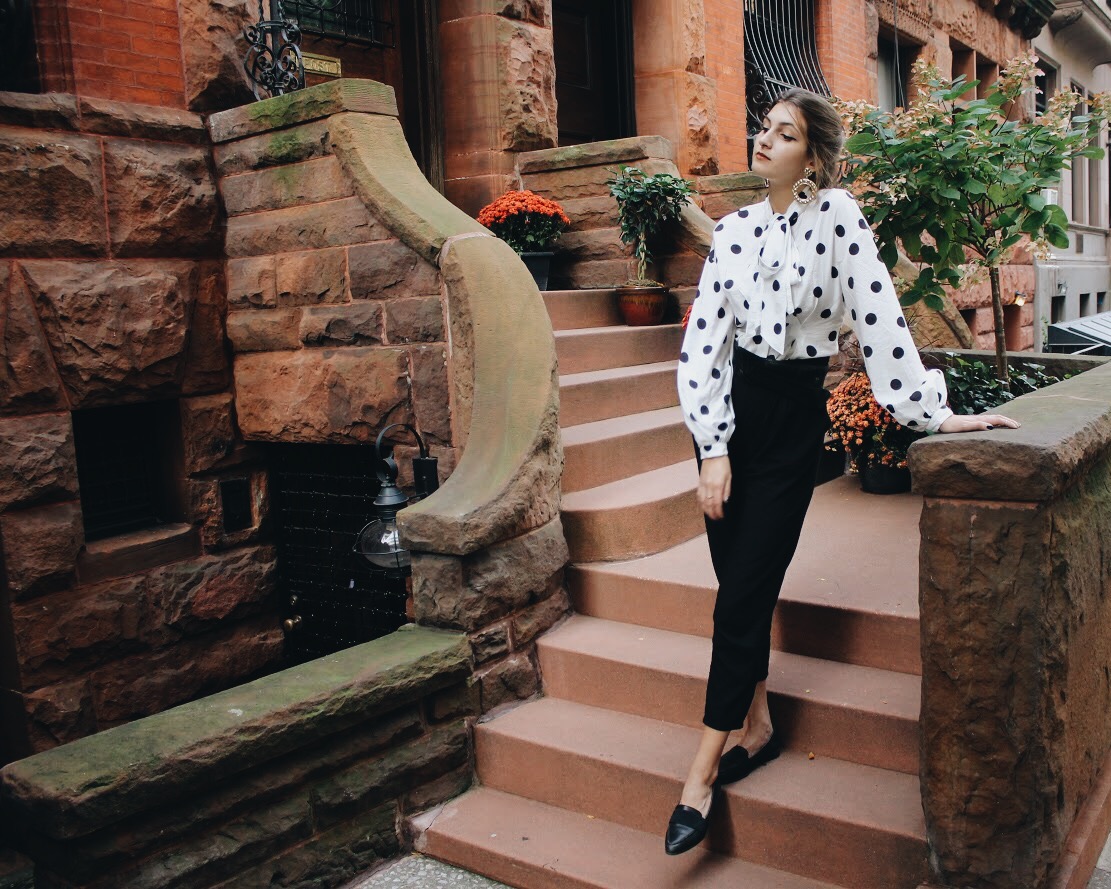 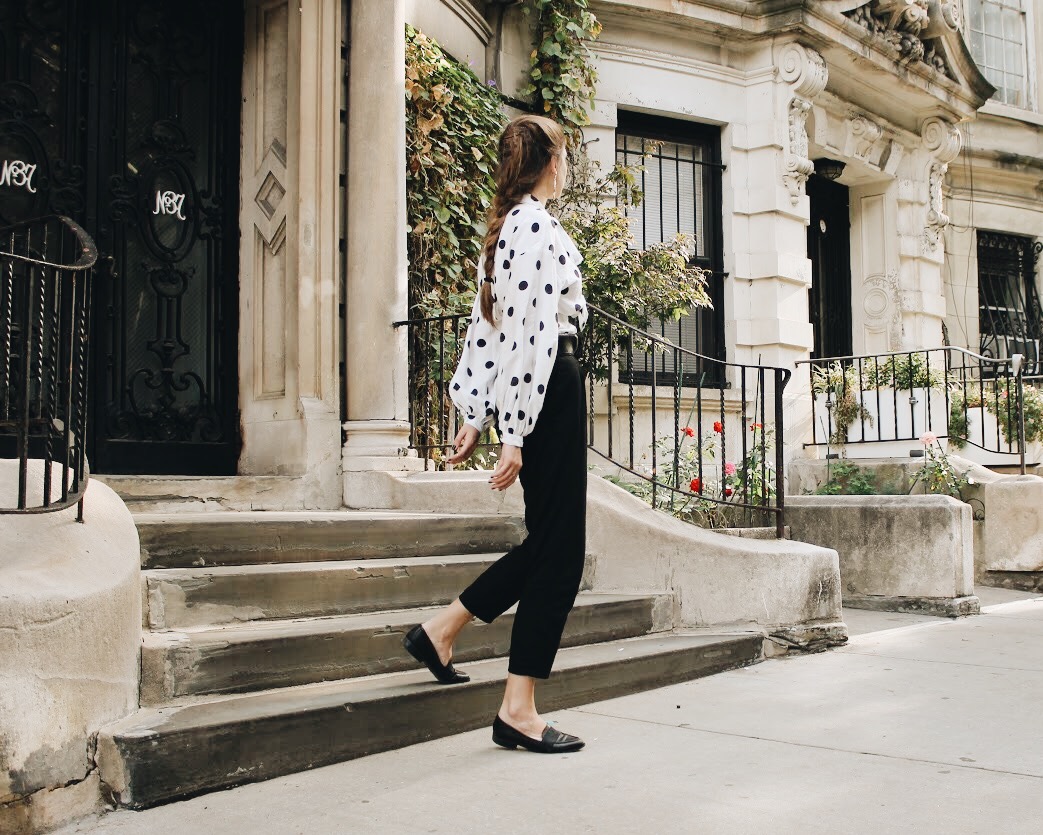 In general, there are two situations in which I believe grown ass women should wear polka dots.

As you might be able to guess, I am neither in pursuit of an at-home costume nor currently employed as a fictitious rodent at a theme park that encourages the Peter Pan Complex. I’m just a girl, standing in front of a camera, asking it to ignore the clear violation of one of my most sacred sartorial tenets. 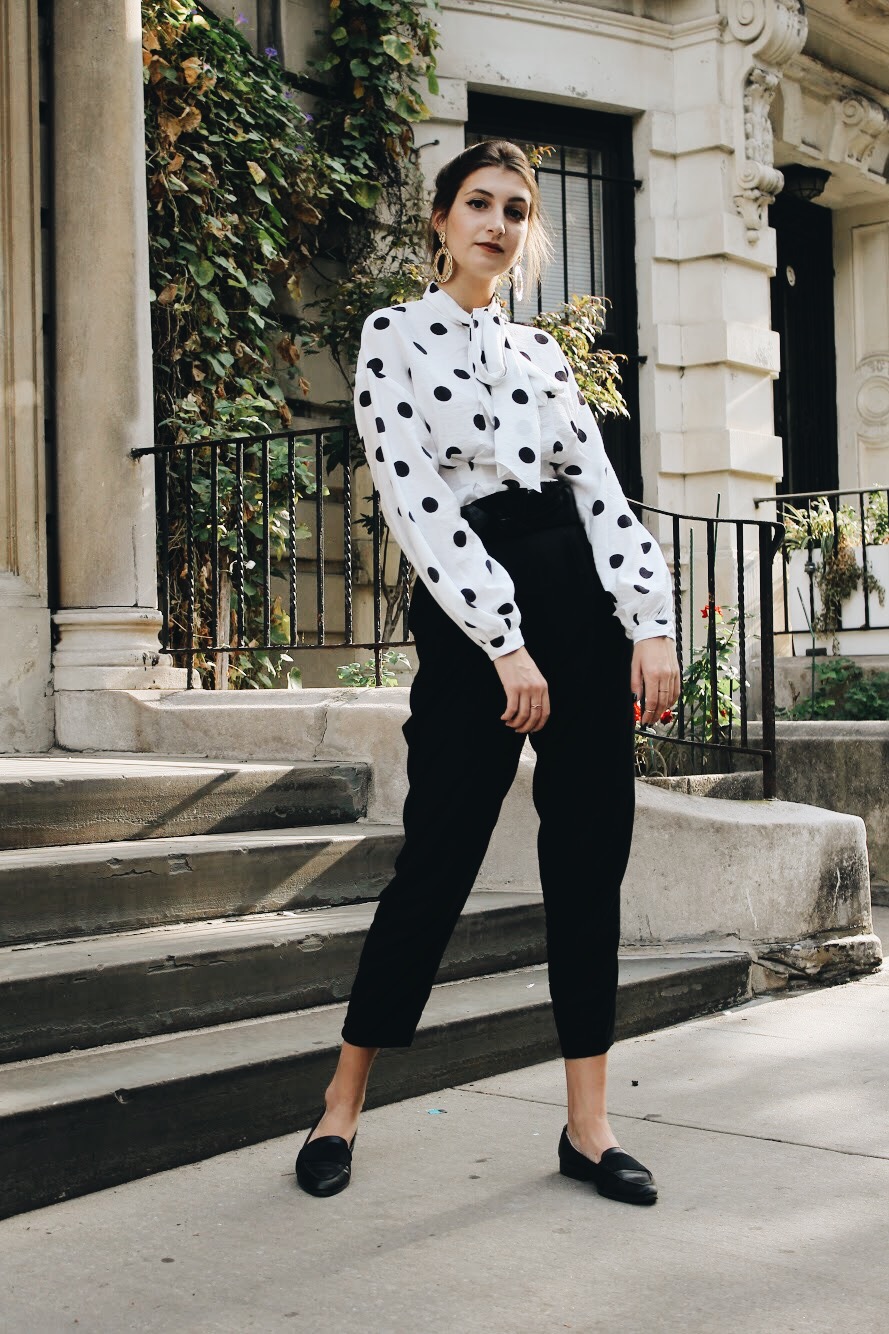 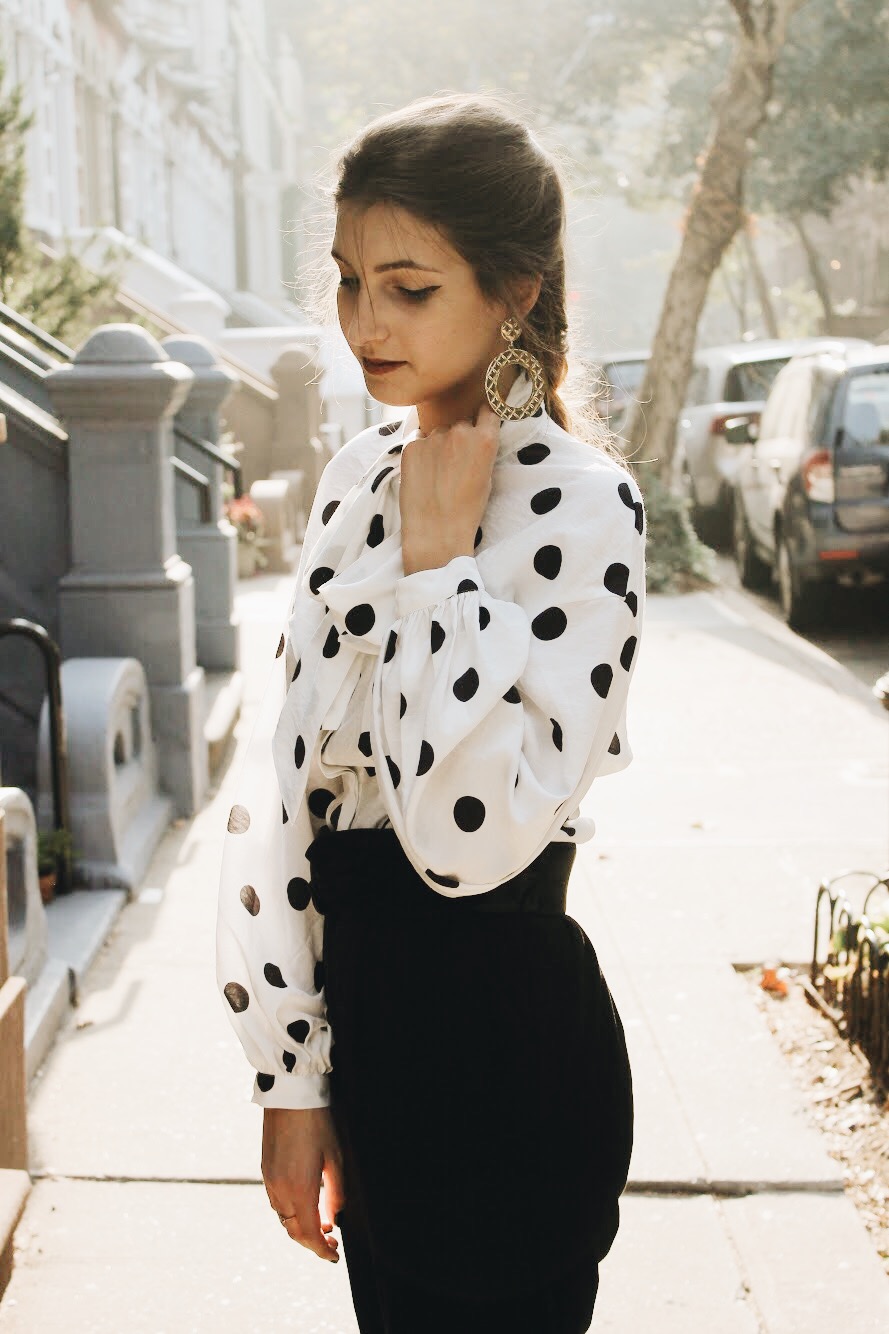 I’m not quite sure why I loathe polka dots—it might have something to do with the fact that I think they’re too cutesy, or too childish, or that if you stare at them for too long your eyes start to go fuzzy. But I found this high-necked, puffy-sleeved beaut on sale at H&M a few weeks ago and immediately sent it to my friend with the strong recommendation that she buy it.

And in quite the fortuitous turn of events, she did! Which works out well for me because I might not be able to justify purchasing a polka dotted item, but I feel much less strongly about renting one. 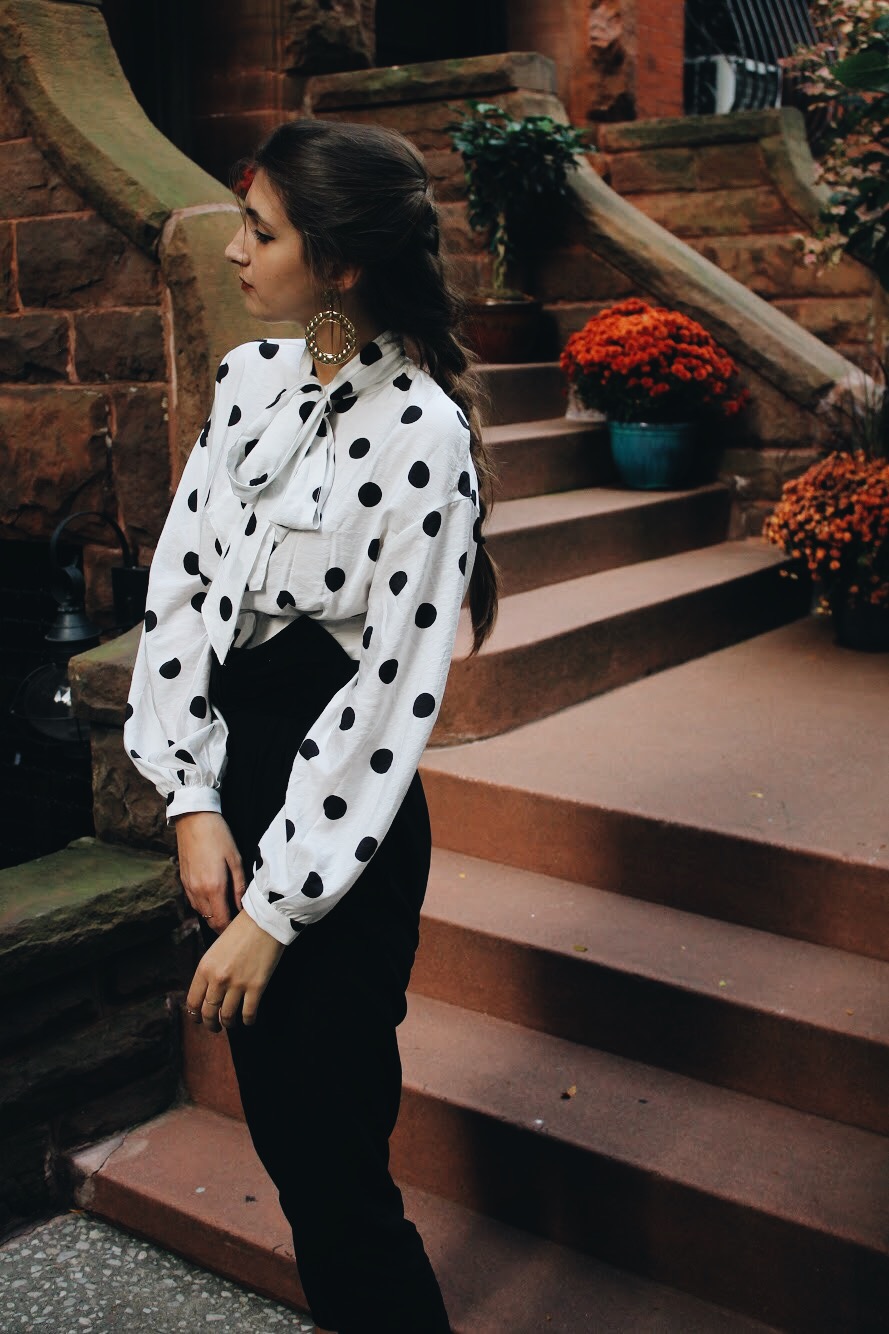 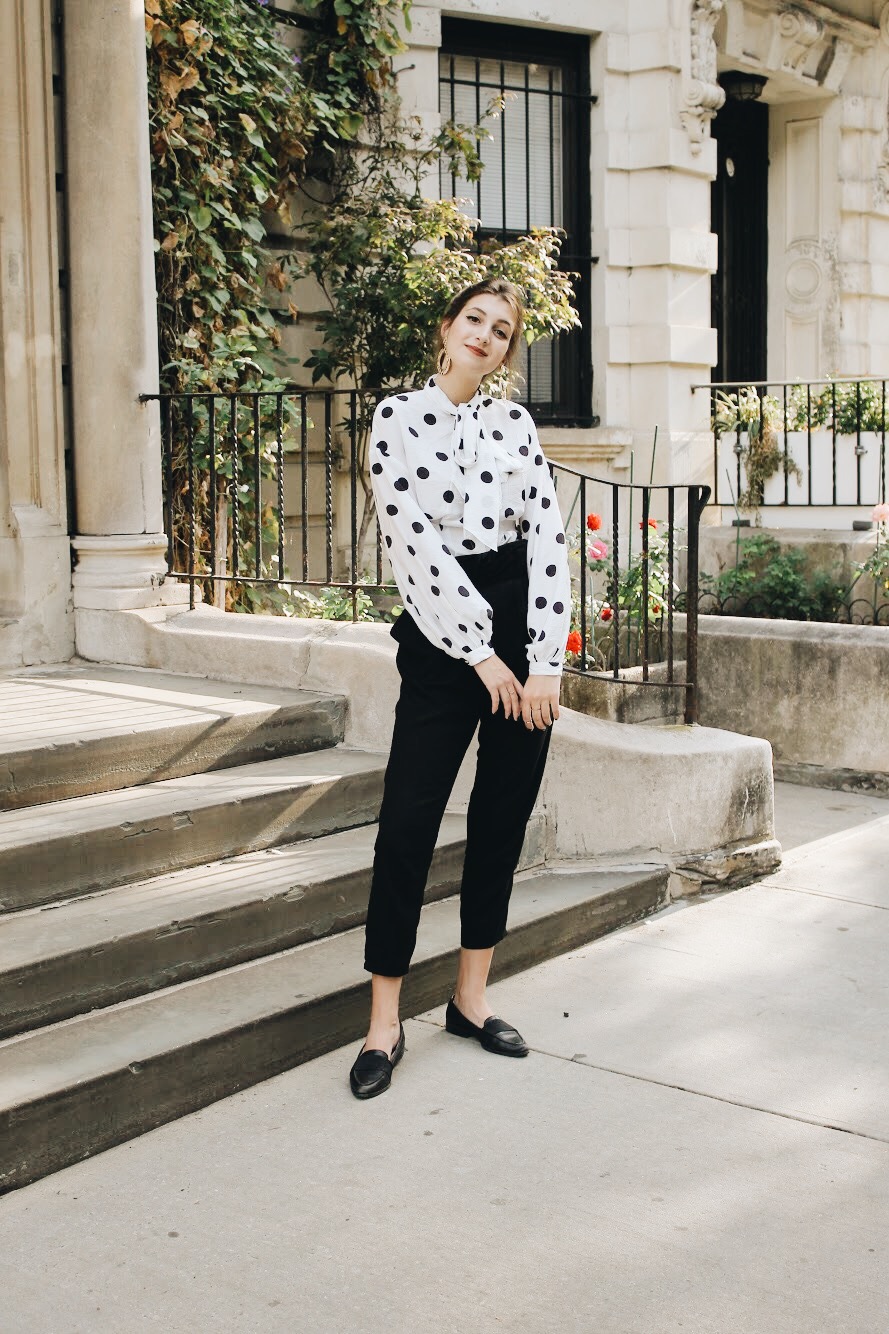 I love the shape of this blouse, which is very structural and dramatic. Thanks to the pussy bow (which is not something I ever thought I’d want, given that I’m not a 16th century French aristocrat named Jean Pierre) and bold sleeves, it’s pretty much all you need for a well-put together outfit; just add pants (nudity is illegal!) and shoes (you don’t want to get a venereal disease from the city streets!) and you’re good to go. 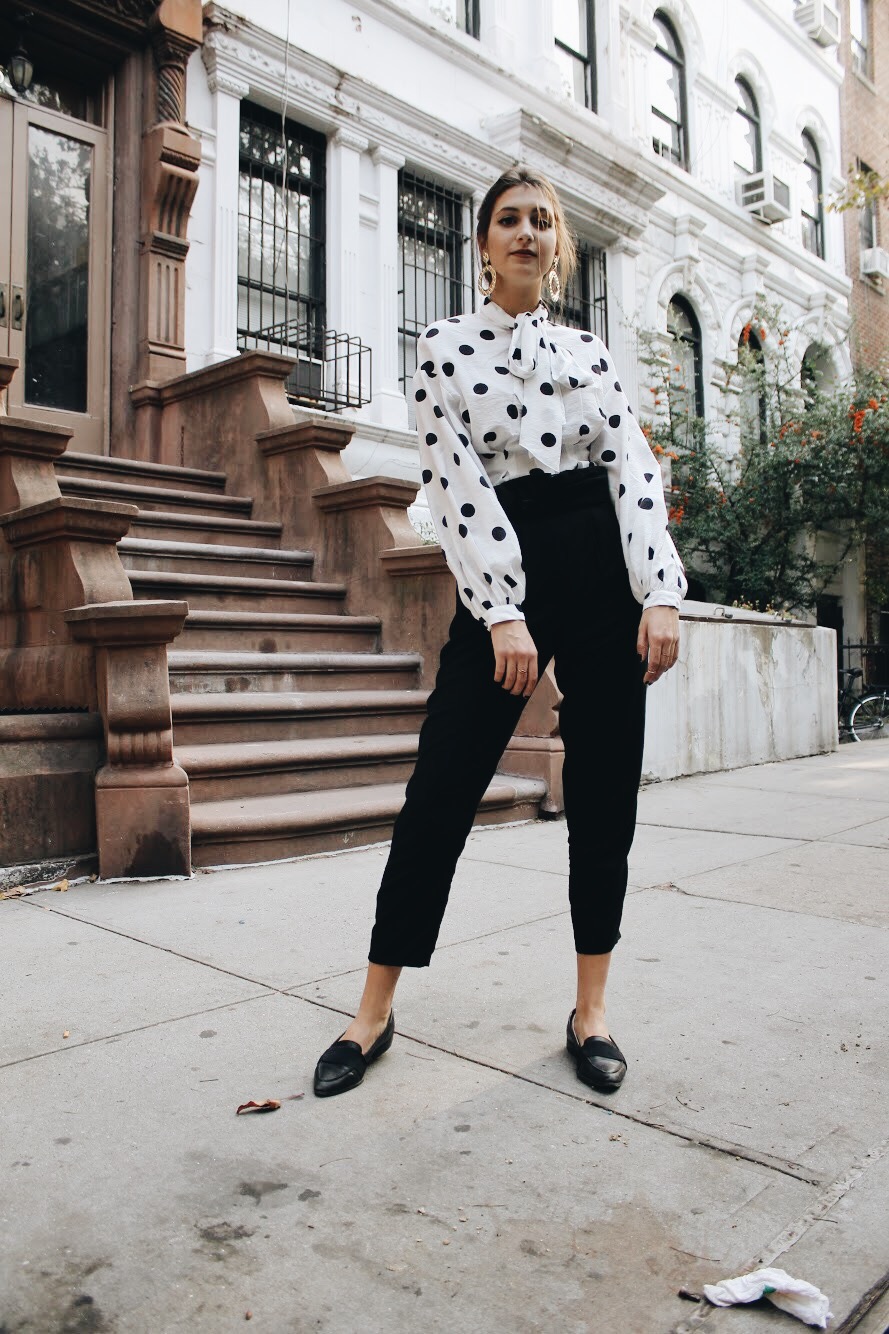 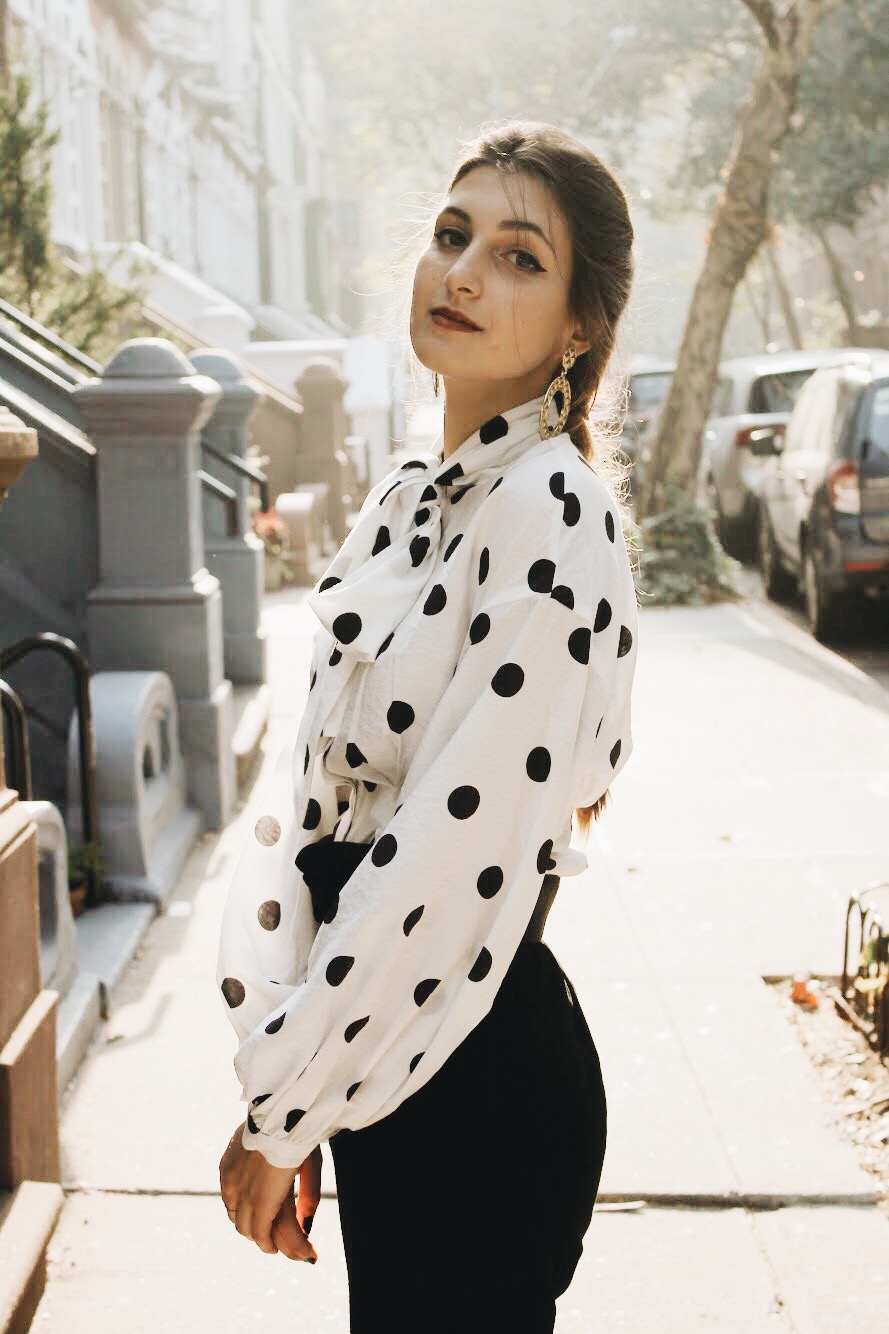 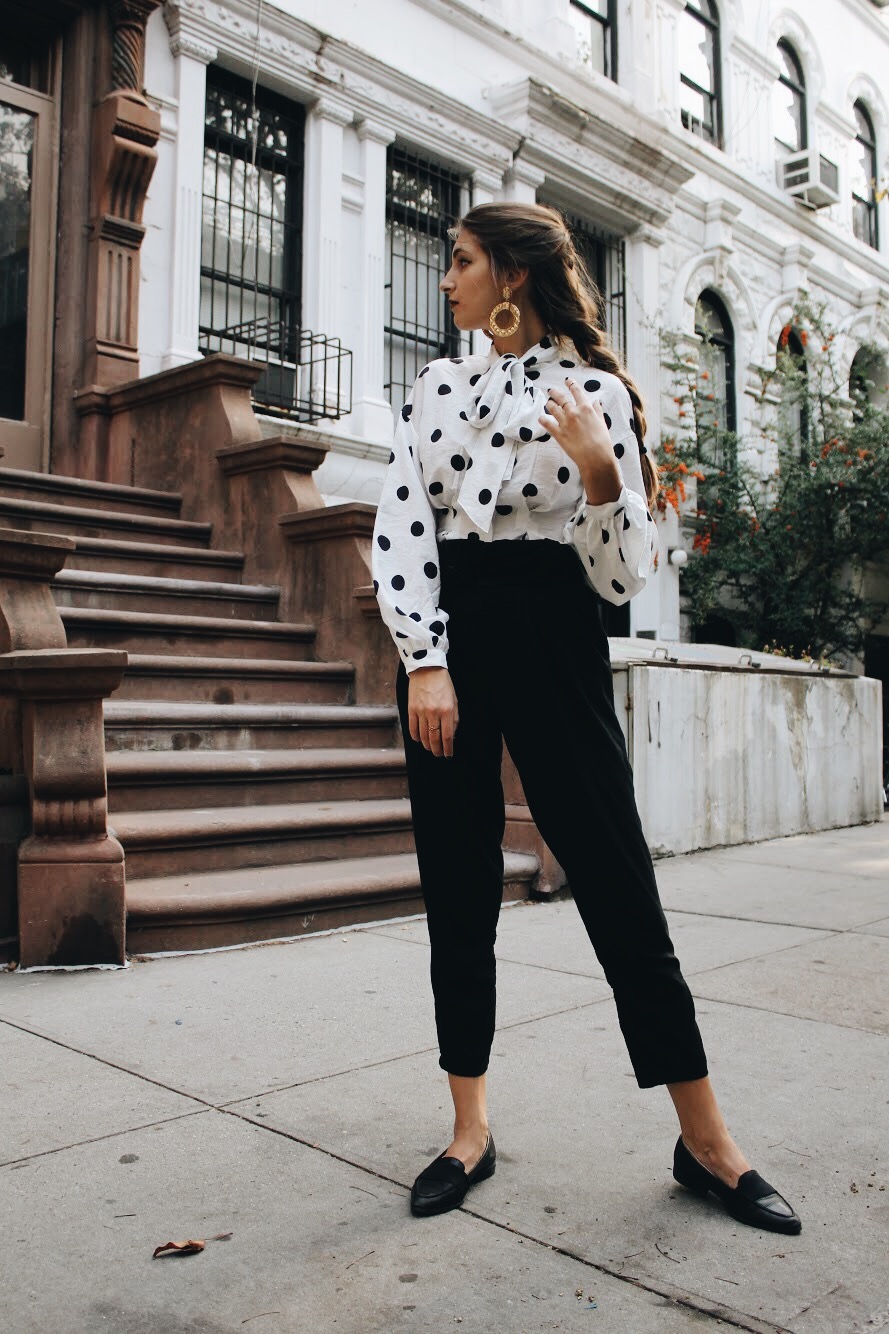 Here, black cigarette trousers that I wear when I want to feel like I’m starring in a 1960s movie are accompanied by the world’s most useless black belt—I had to keep holding it up, so much for functional fashion—and black pilgrim shoes. Then I added a red lip because I was feelin feisty and massive gold earrings that could probably double as home décor pieces. 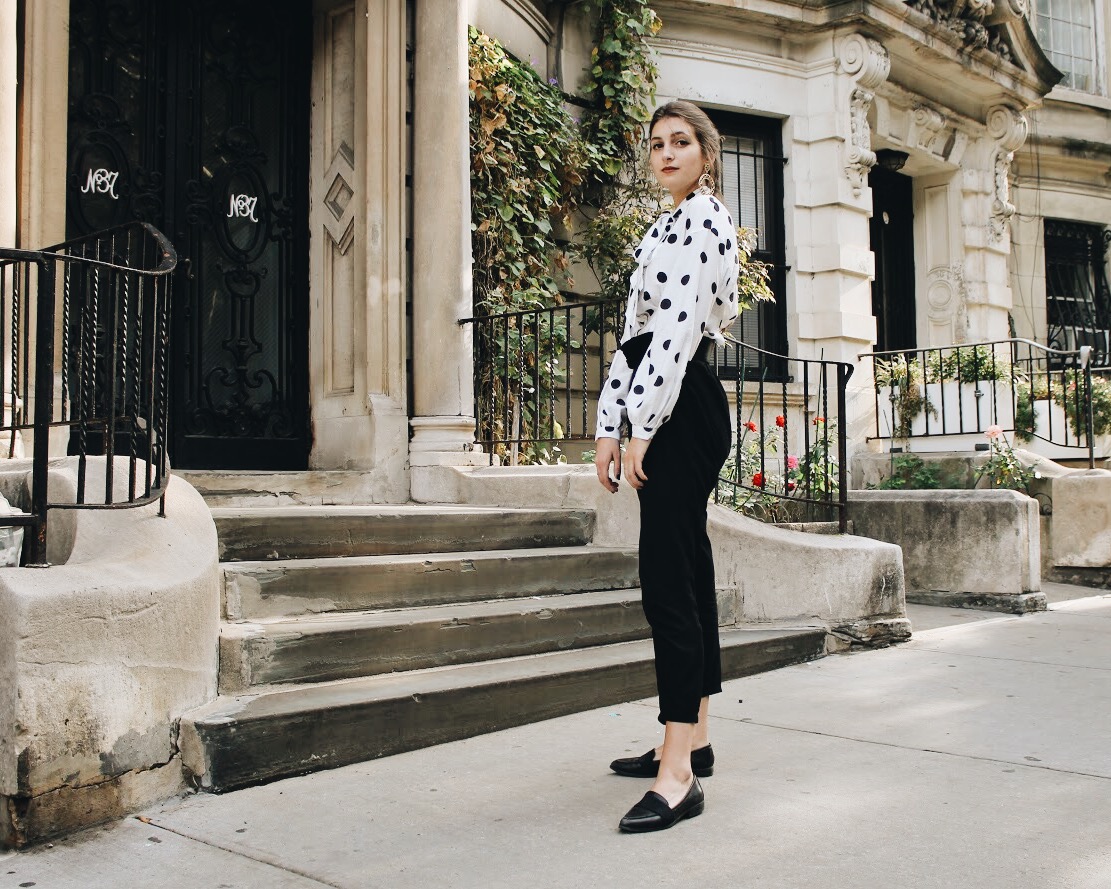 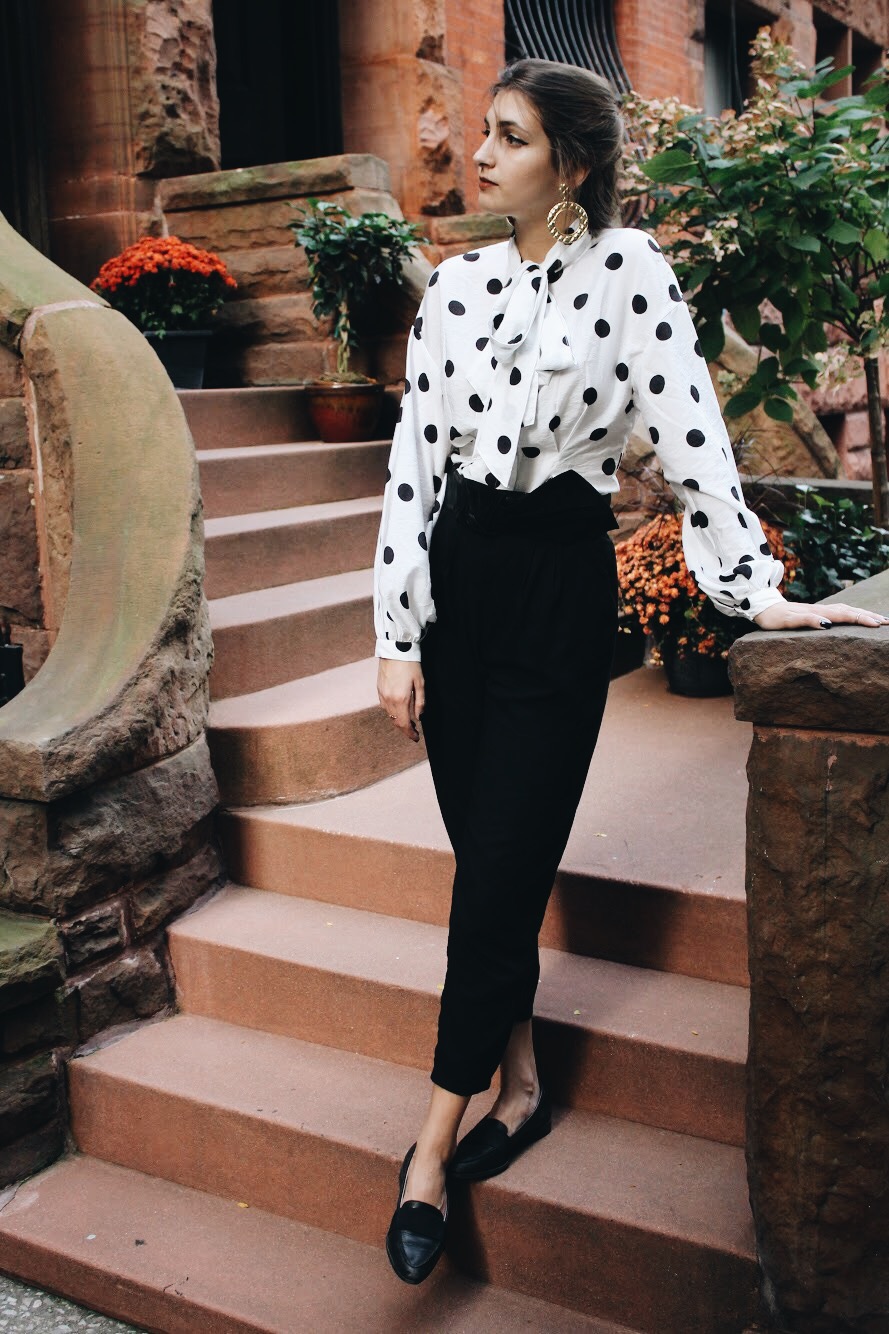