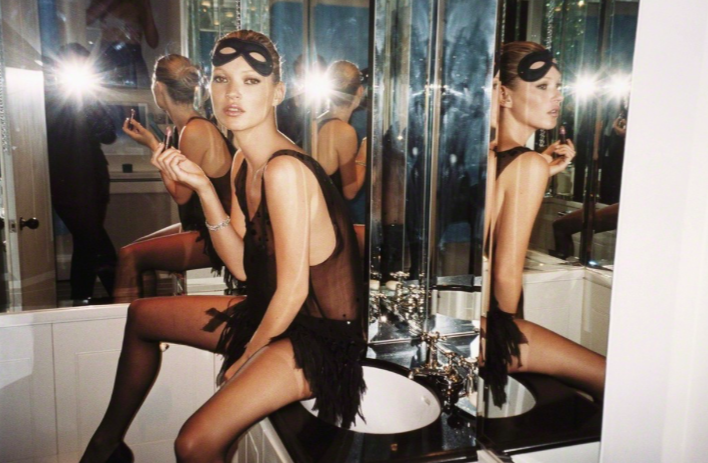 I vividly remember the first “nighttime” ensemble I ever envied.

It was during a 5th grade overnight field trip to some remote Italian town, and there were five of us in a room. There was a girl, an American, who I had always envied because she had cool things like bangs and Twinkies for lunch. We were all getting changed to go out for dinner, and this girl (she shall remain unnamed because she was my nemesis who stole my first love and tbh I’m still not over it) whipped out a grey skirt from Benetton with a pink glittery waistband. She styled the look with a sparkly tank top and a condescending grin that said I know I’m cooler than you, leaving me in my turtleneck and bootcut jeans wanting to melt into a pool of inadequacy.

A week later, I dragged my mother to Benetton and convinced her to buy me that same skirt. I wore it well past its social decency expiration date until I moved on to the next forbidden fruit du jour: the tube top.

I recently threw a wine-and-emotions-fueled fit whilst trying to come up with a going-out outfit that said “I’m a confident millennial woman with self-respect and a job” but also said “I do have boobs, you know”. It then occurred to me that the criteria for our nighttime attire is in a state of constant evolution.

So I decided to write about it, because none of my friends would listen to me discuss the subject in person.

The Situation: A birthday party, which seeing as I attended private school and had a mandatory uniform, was really just an opportunity for everyone to show off their “home clothes” and see who had the coolest jeans.

The Cast List: A lilac-colored shirt with shimmery flowers, sneakers (a symbol of defiance in the face of dress shoes and knee socks), a crop top and shorts combo that was v 2014 and proves what a visionary I was, and a puce green turtleneck my mother convinced me looked chic with a matching green headband.

The Situation: Behold the advent of the boy-girl party, wherein the entire grade would congregate in the backyard of whoever didn’t live in an apartment in the city to play pop culture-related quizzes and eat chips out of a cup. Everyone’s parents came.

The Thought Process: “How can I translate the Lizzie McGuire aesthetic to my wardrobe of sensible sweaters?”

The Cast List: A t-shirt that had a list of descriptors for my zodiac sign (Aries) emblazoned o’er my nonexistent chest, a velour red “devil costume” dress that had a faux fur collar —my first and last attempt at the sexy Halloween getup—, grey Vans skater shoes with baby blue script that I thought made me look cool and tomboyish, and a pleated skirt with gauze ruffling that I wore to my first school dance with a high-neck frog button top.

The Situation: a) no one had their license yet, so we wore our “real” clothes under a sweater and changed in the bushes/movie theatre bathroom after parents dropped us off or b) people had their licenses, but spent them driving to suburban houses so everyone could gather in someone’s basement to sip watery beer and stare at each other in awkward silence until some hero took one for the team and went home, making it ok for the rest of us to slowly filter out.

The Thought Process: “I’m too poor for Abercrombie, but the Old Navy logo is a reindeer which is kind of similar to a the Abercrombie moose logo so maybe if I wear that I can convince everyone I’m trendy?”

The Cast List: Babydoll tee after babydoll tee, UGG boots and Birkenstocks, those $6 Forever 21 bandage skirts in every neon colour under the sun, and the skinniest jeans that my mother would let me buy.

The Situation: Frat parties that I was really into at first but had me needing a shower, an IV drip of gatorade, and possibly Jesus by the end of them.

The Thought Process: “If I wear this bra with high waisted jean shorts can it pass as a bralette and make me look Coachella-y?”

The Cast List: A rag of a white t-shirt that I wore over a sports bra as my uniform to every foam/paint party I attended, multiple pairs of high waisted Levi shorts that I unsuccessfully DIY’ed, flannels for when I wanted to look #chill and #vintage, and my Goodwill Christmas sweater with three cats saying “have a meow-y Christmas!” on it that I proceeded to wear year-round.

The Situation: House pregames, bars, but mostly me taking a lap at whatever nighttime establishment I had been roped into attending and then Irish-exiting to order Domino’s and eat it alone in my bed whilst watching Emma Thompson movies.

The Cast List: Literally my UVA Dining Hall t-shirt, a tank top I bought when I was 12 that at this stage looked like an intentional crop top, high waisted mom jeans because #fashion, and black heeled ankle boots that made me taller than all the guys but at least this way I could locate my friends in the line for the bathroom with ease.

The Situation: Clubs with promoters, bars with a big group, or friends’ rooftops —AKA nowhere where I have to pay a cent because the real world hits hard and if I need to make the call between a $12 glass of wine and $12 worth of frozen foods from Trader Joe’s I will always choose the latter.

The Thought Process: “How can I translate what I wore to work into a nighttime-appropriate look?”