Bryan spells his name with a Y. I just feel like this shouldn’t go unnoticed.

DeMario: You’ve gotta let me back in. I talked to my Uber driver about you and he told me to not let you go
Rachel: Shoulda taken Lyft my man

The tickle monster “really feels like he has a handle on the kind of guy she wants”, k

The night has rapidly progressed into show and tell. Tickle Monster brought a pair of massive hands, because his humour knows no bounds. Alex brought a Rubik’s cube in case he ran out of hair gel and had to find something else to occupy himself with other than fixing his hair. Kenny brought pictures of his daughter because he has no shame in selling his daughter out on national TV to play the sympathy card. And Blake brought some overly dramatic antagonism against Whaboom because he figured without it, he probably wouldn’t get any airtime and is hoping for a few SugarBearHair #spon posts once he gets booted off.

Blake, who has known Rachel for less time than DeMario knew his Uber driver: The Rachel I know is too smart to be duped by a guy like that. She wouldn’t do that. I KNOW HER

Meanwhile, Whaboom decides his only line of defense in the whole Blake situation is trying to out him to Rachel. Not kidding. This is how the conversation goes:
Whaboom: The other night he was over my bed, peeling a banana, and licking the banana…
Rachel, asking the important questions: Did he finish the banana

Rachel: So Lucas said you were standing over his bed eating a banana, care to explain?
Blake: Haha, that’s crazy! Banana? I don’t know anything about bananas! What is a banana? Where am I?

With #bananagate behind us, we now head into the rose ceremony. I haven’t seen this many bow ties since Bill Nye.

Both Whaboom and Blake get sent home in quite the Shakespearean ending. The star-crossed lovers then have a bizarre “fight” wherein Whaboom casually accuses Blake of taking steroids and Blake attempts the most cringey impersonations of a clown (see below) I have ever seen to the point where I feel personally victimized for having to witness that.

I want to point out that we haven’t actually seen Rachel in ten minutes due to this unnecessary sidebar. Is this even The Bachelorette anymore idk

Chris B. Harrison: You’re going on a date you can only do here in L.A. Congratulations, you’re all going to a wheatgrass tasting!

Did some rich uncle at ABC die and leave his windfall to The Bachelor franchise or something? So far they’ve gotten Ashton Kutcher and Mila Kunis on the show and this week they’ve even roped Ellen DeGeneres into it. Need I remind anyone that a mere two years ago the contestants spent the majority of the season wasting away in IOWA???

Ellen’s idea of integrating the guys into the show is making them dance around like strippers which I am here for but also feel kind of weird about because if the gender roles were reversed we would all be up in arms right now, no?

Fred’s all “I’m not a girl not yet a woman” and is trying really hard to convince Rachel that he’s age-appropriate for her. Might not have wanted to ask her permission to kiss her then, pal

Fred: Can I kiss you?
Rachel: You’re asking me?
Fred: I didn’t want you to feel uncomfortable
Rachel, and also all of America: Well now I just feel awkward

Rachel decides to send Fred home after taking him aside WITH THE ROSE, which tbh is a stone cold move.

ONE ON ONE WITH ANTHONY

Apparently this is officially the week of “doing things they can only do in L.A.”, which now includes… horseback riding through Beverly Hills? What are you doing, Rachel? You can’t just waltz into a clothing store on a horse! Who do you think you are, Woody from Toy Story? 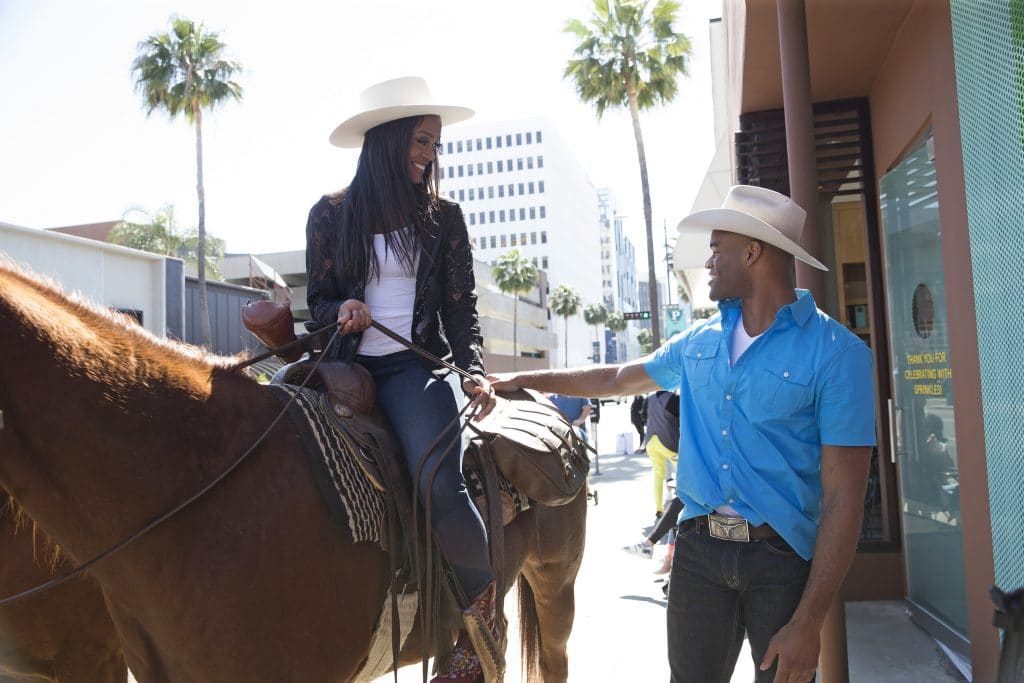 Anthony is trying to explain that he’s an old soul but all I can focus on is the fact that he’s got both his ears pierced. And not in a cute Johnny Depp/burgeoning pirate kind of way, in a “I’m 12 and I just got my ears pierced at Claire’s with $20 diamond studs” kind of way.

To keep her company on the group date, Rachel has enlisted the help of her fellow contestants on Nick’s season, including Corinne and my sovereign queen Alexis. Which they’re available for because their post-Bachelor occupations all read “professional guest stars on the next two seasons of Bachelor franchises”.

They will be spending this date wrestling, which is good for Kenny “Pretty Boy Pitbull” the professional wrestler and not so good for, say, Brady “I used an entire bottle of Garnier styling mousse this morning” the male model. 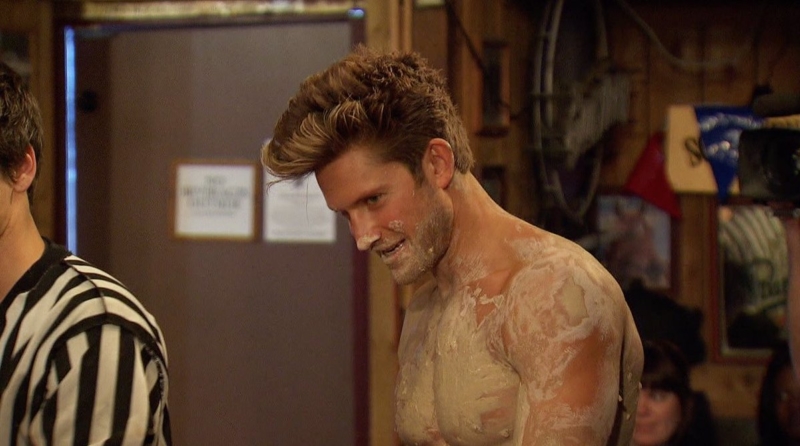 After one cringey outburst of “LET ME SEE YOUR JUNK WOO” from some DAB who definitely might be a producer since the rest of the bar is dead empty, the fighting begins.

In the biggest upset since a racist honey-baked ham won the U.S. presidential election (too soon?), Bryce beats Kenny in the wrestling match.

Meanwhile, Eric is having a bit of a crisis and to my surprise, it has nothing to do with the questionable scarf he elected to wear on this date: 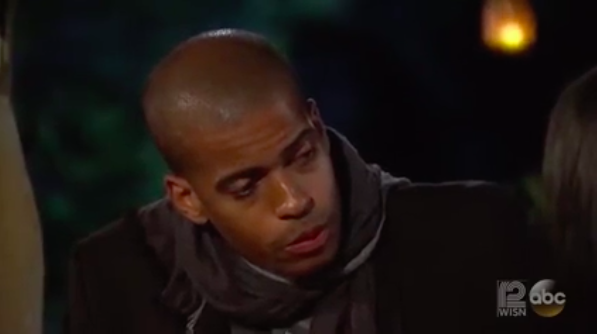 Bryce and Lee (who we now know to be a high-key racist and general sentient pile of shit) have taken it upon themselves to throw Eric —who, it should be pointed out, has done nothing wrong besides choosing the aforementioned scarf— under the bus.

Lee: I love you to death, but you yelled at Iggy last night, a guy who I hardly know but will defend because I’m desperate, so now my opinion of you has changed. I love you a lot though. Almost as much as I love my hairdresser.

Why is Lee being so condescending to Eric though? What the fuck kind of line is “I’m glad you got the rose, man, for growth.” Who do you think you are, Dr. Phil? 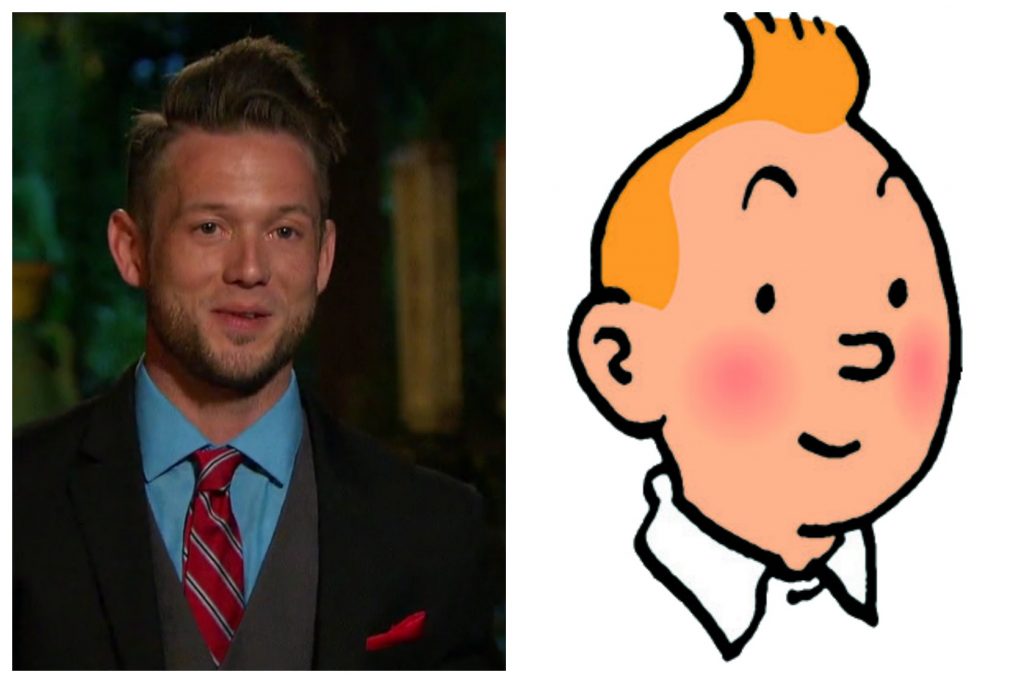