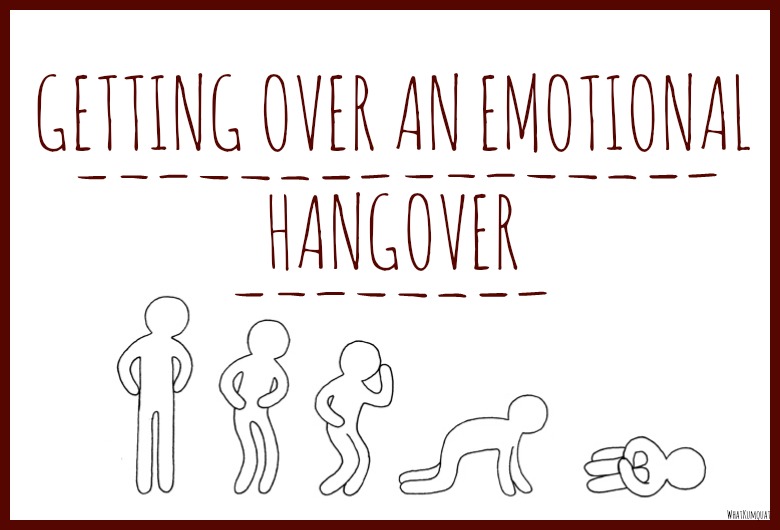 It’s Monday, it’s about to rain (because if AP Lit taught me anything, pathetic fallacy is REAL), and I’m coming down from what seems like a months-long emotional hangover that really hit its peak the second Tuesday in November.

The months leading up to the 8th of November were like those few blissful hours after you first wake up following a night of drinking. You feel great -too great- because you’re probably still drunk. Confident that you’ve beat the system, you wash your face and maybe even suggest brunch. The day is young! The world is your sober oyster! Maybe you’ll go for a run! Pen the next Great American Novel! Learn how to make a macaron!

And then it hits you, like an orange toupéed pile of bricks, and you’re catapulted into a day (or in this case, months) of feeling like a royal pile of shit. Not even a marathon of Emma Thompson movies can remedy the situation.

I know that for me, the last couple of months were spent trying to internally reconcile what I had previously considered a relatively progressive country with the reality of what was happening in the political sphere. Obviously I am white, educated, straight, and, despite being personally broke, have parents who are not and can help me out if necessary. My position in this country is a privileged one and I know that, but still. As a Semi-American Human who is not, I don’t know, a complete immoral piece of shit I too became increasingly frustrated and embarrassed by the sudden turn of events. With each cabinet member nomination and each tweet, our new reality seemed to depart farther and farther from anything in the realm of social decency and intelligent thought. The last straw was when a man best known for a semi-successful reality TV show called our Lord & Savior Meryl Streep “overrated”. What fresh hell was this?

Last Friday we watched a man thoroughly unfit in to be president sworn into office. Well actually, most of us didn’t, because we had more enjoyable things to attend to like waiting in line at the Post Office or folding our socks. Despite whatever that bizarre attempt at damage control coming out of the White House press room would have you believe. Though you’ve gotta love how the press is now literally fact-checking Trump in their headlines: “He accused [the media] of inaccurately reporting the size of Donald Trump’s inaugural crowds. They didn’t.” (HuffPo)

But then on Saturday, millions from all over the world came together to remind us that hey! maybe the world is still salvageable! and it was like the advil was finally kicking in. You still kind of feel like regret and despair and you vow never to eat 2$ burgers from a sketchy late-night establishment again, but at least you know you’ll probably live to see the morning. It’s a process, but getting over an emotional hangover takes time, self-reflection, and copious amounts of pizza (or if you’re vegan/gluten free/Gwyneth Paltrow… an acai bowl? I don’t know, I’m trying to be topical here).

Like its physical counterpart, there are things to be learnt from your emotional hangover. For one, moving on is important but ignorance is not. You can (and should) think positively and hope for the best in the future, but don’t forget why it happened. This way, the next time we are confronted with a sexually-assaulting Voldemort who thinks he wants to run for an office that gives him the nuclear codes, we are better equipped to ensure that doesn’t happen again.

HERE ARE SOME WAYS TO GET INVOLVED: