You know when you’re at a bar, minding your own business and counting down the minutes until late night pizza becomes acceptable, when suddenly you hear…

Omg shots? SHOTS! Lets do shots. Ok fine we don’t have to do shots, lets just get a drink. Ew no I can’t drink beer, do you know how many calories that has, I juuust went to Pure Barre! Vodka soda no ice? Great!

…and it’s like the Pure Barre enthusiast is wearing a neon sign around her neck that says “sorority bitch”. You can identify ’em from a mile away. And I do mean this literally because even if you can’t see them, you can hear the “OMG LET’S GET BRUNCH TOMORROW!” more clearly than you can hear the 50th remix of What Do You Mean currently blasting over the speakers.

Seriously, it’s like a less official Myers-Briggs test. Only it serves a much higher purpose, because once you’ve figured out what kind of person they are, you can also figure out who you need to avoid. 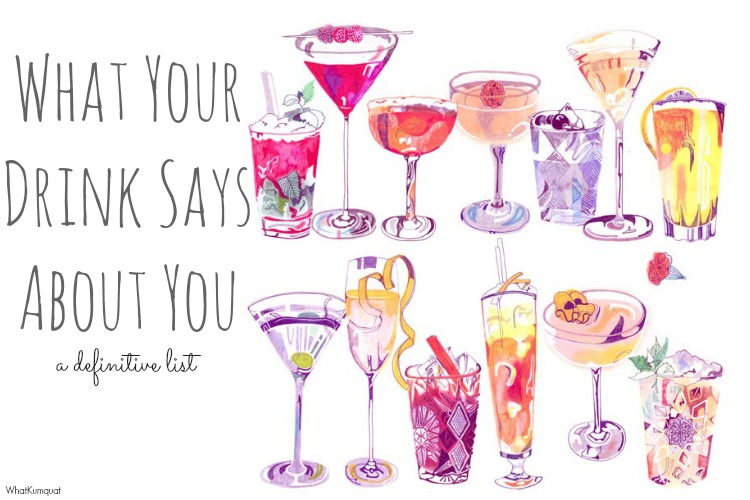 NATTY LIGHT
If you see someone drinking a Natty Light by choice, run. Do not look back. Do not try to make excuses for him/her because he/she “has the face of an angel”. If someone is drinking this abomination parading as beer unironically and sober, chances are they are a) in a frat and also probably wearing obnoxiously-coloured shorts or b) still in high school, and think Natty is “really good alcohol”. Either way, run.

ARTISINAL BEER
This person is almost certainly wearing a flannel and is also probably passionate about hookah, Bernie Sanders, and their study abroad programme in some obscure country. On one hand, they deserve an element of respect because committing to beer for the night is essentially committing to sobriety. On the other hand, who goes out of their way to order some foreign sounding beer hand-crafted by elves in the hills of Scotland? Get a Corona, you pretentious prick.

RUM
Are you Captain Jack Sparrow? If you added coke to your rum, is this your first time drinking?

TEQUILA SHOTS
The short-term equivalent to the vodka soda, the person ordering these is a hundo p female and between the ages of 18 and 24. If not, they are Mexican and exhibiting an admirable sense of patriotism.

AN EXPENSIVE COCKTAIL WITH A NAME LONGER THAN YOURS
To me this says “I’m very very rich!”, “I have the alcohol tolerance of a squirrel!”, “I skipped the fiscal responsibility section of Econ and am spending my paycheck on glorified juice with a drop of vodka!”, or “I have delusions of being Carrie Bradshaw!” Regardless of which actually applies to you, just know I hate you.  And I kind of want to be you.

MARGARITA
The person drinking a margarita has elected to throw calorie-related caution to the wind and is out to have a fun fresh n flirty night with 2-20 of her BEST girlfriends. My advice would be to follow her, because she probably has the best suggestions for late-night tacos.

GIN AND TONIC
You are my mother. If not, you probably meant to order something else.

WHISKEY NEAT
This is a thinly-veiled attempt at looking grown up, and I see right through your shit. No one, with the possible exception of Winston Churchill and Jack Donaghy, actually enjoys these. One of those people is a fictional character, and the other is dead. People who choose to spend their nights out casually sipping on whiskey have seen one too many Mad Men episodes for their own good. Do less.

WHITE WINE
SiNgLe LaDie$ who don’t need no man!!!!…or who at least don’t need no pants, because there is no way in hell they made it out of their apartment. You can probably find them curled up in the fetal position clutching a bag of Doritos crying to Becky about how no one understands them whilst Dance Moms plays in the background.

If you encounter someone ordering white wine at a bar, you should probably go talk to them because they’re the type of person who has their shit together and is a mature adult and irons her/his sensible button downs.

RED WINE
This person is either really into preventing heart disease or is harbouring intense desires to become Olivia Pope.

WATER
On antibiotics, pregnant, or recovering alcoholic. Either way, these people are the ones to hang around, because they’ve been observing all the drunken idiots all night and probably have some great stories.