I figured this merited an entire post of its own, and I don’t really know how to start, so I’m foregoing any witty intro and going straight for the food pics.

1. THE HOLY GRAIL OF SMORGASBURG, THE RAMEN BURGER 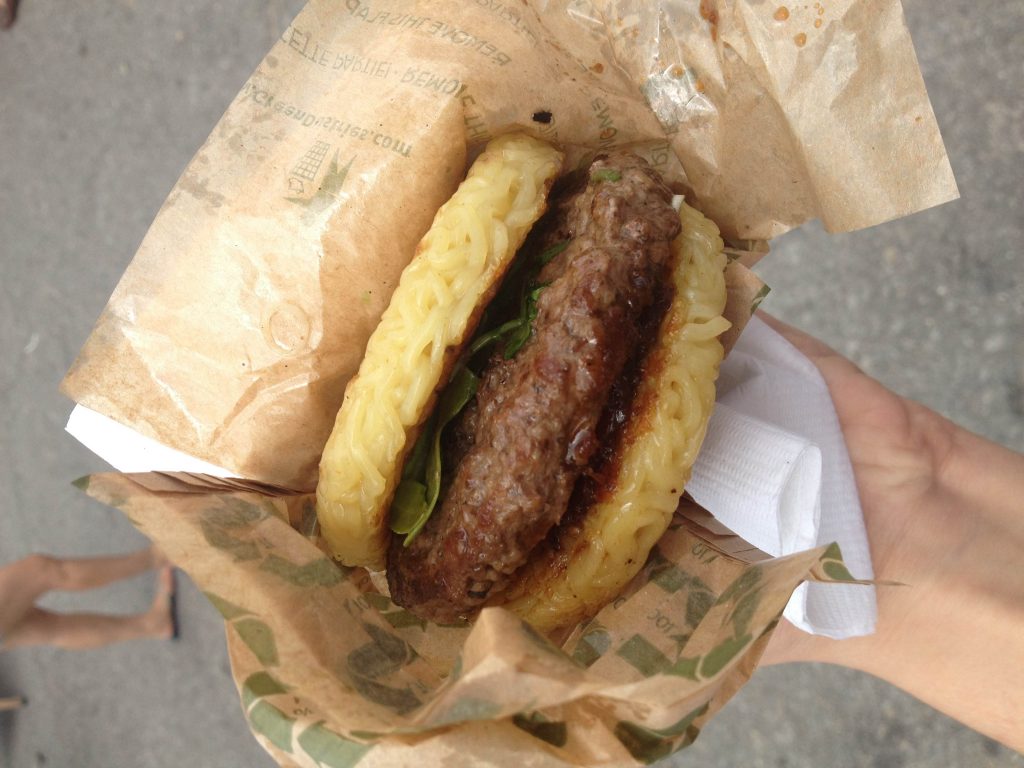 Words cannot describe the ramen burger. When you look up “perfection” in the dictionary you will see a referral to this very product. This godsend deserves whatever the food equivalent of an Oscar is. It deserves its own shrine in my house. It deserves its own national holiday and maybe a song to sing its praises. In fact, I have suspicions that “Drunk In Love” was written as an ode to this American masterpiece.

The ramen burger is exactly what it sounds like: a hamburger carefully placed between two ramen patties and topped with green onions, greens, and some magical soy-based sauce with presumably the same addictive qualities as cocaine, except it won’t kill you if you consume too much. Well, you might get diabetes but frankly I would risk it and also probably sell my firstborn child in order to get another one of these. Basically, picture your dream scenario of pure bliss (for example, sitting on a beach in Greece holding pizza in one hand and a cat in the other while Johnny Depp serenades you), magnify that x100, and you will get the ramen burger.

At least that’s what I’m assuming it was, since I was still in somewhat of a daze from my ramen burger and kind of just waltzed over to the nearest sugar-related stand to get my mind off the burger.

It was a pretty good donut, from an organic farm. I knew it was legit because I remember the stand having a massive picture of a cow on the front of it, and nothing screams “organic and fresh and natural” like a cow peacefully eating grass, amirite? 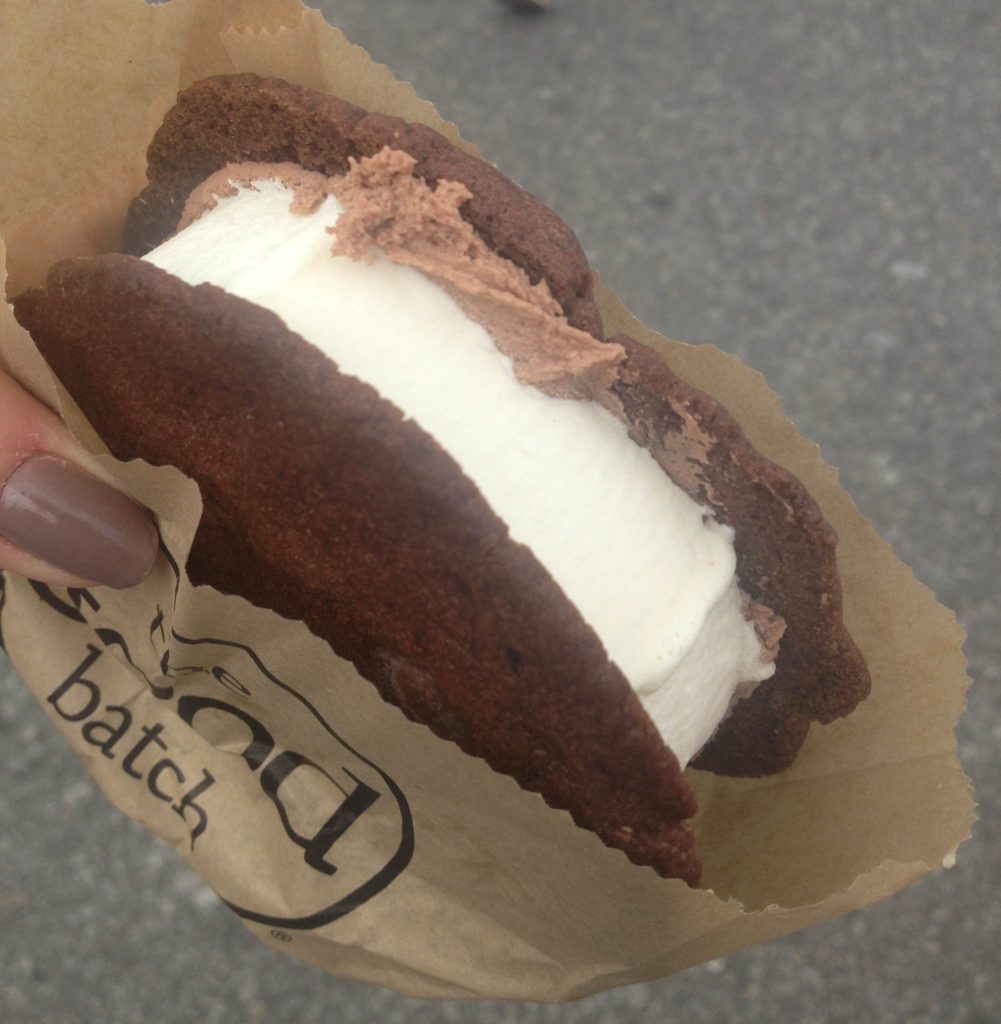 Aside from the fact that it was roughly the size of my head and I hated myself by the time I had finished it, this was one damn good ice cream sandwich. I was entering the early stages of my food coma (we literally ptfo’d on the pier for a solid 45 minutes after Smorgasburg) when I began eating this so I don’t really remember what was in it, but judging from the picture, I can tell you with confidence that is definitely vanilla ice cream. Due to the fact that I’m pretty sure I blacked out from eating so much I googled the vendor (The Good Batch) and it appears there was nutella involved in the making of the cookie.

I had to include this picture cause I looked like a damn fool taking it and also how stupid are all these food-in-the-air pics? I believe high-off-food-and-slightly-delirious Elly thought that the background looked scenic at the time but it doesn’t and I ended up with an embarrassingly stereotypical but also funny (the sandwich looks regal af) Smorgasburg photo.

4. OTHER THINGS AND SOME RAMBLING

There were lots of organic and authentic looking foods at Smorgasburg; think of it as kind of a farmer’s market but there’s more than just vegetation you can choose from. It’s the perfect place to go if you’re looking for something a little different and if enjoying unique and strange-sounding foods are something you spend your time fantasizing about.

Or if your Instagram has been slacking lately and you need to redeem yourself. 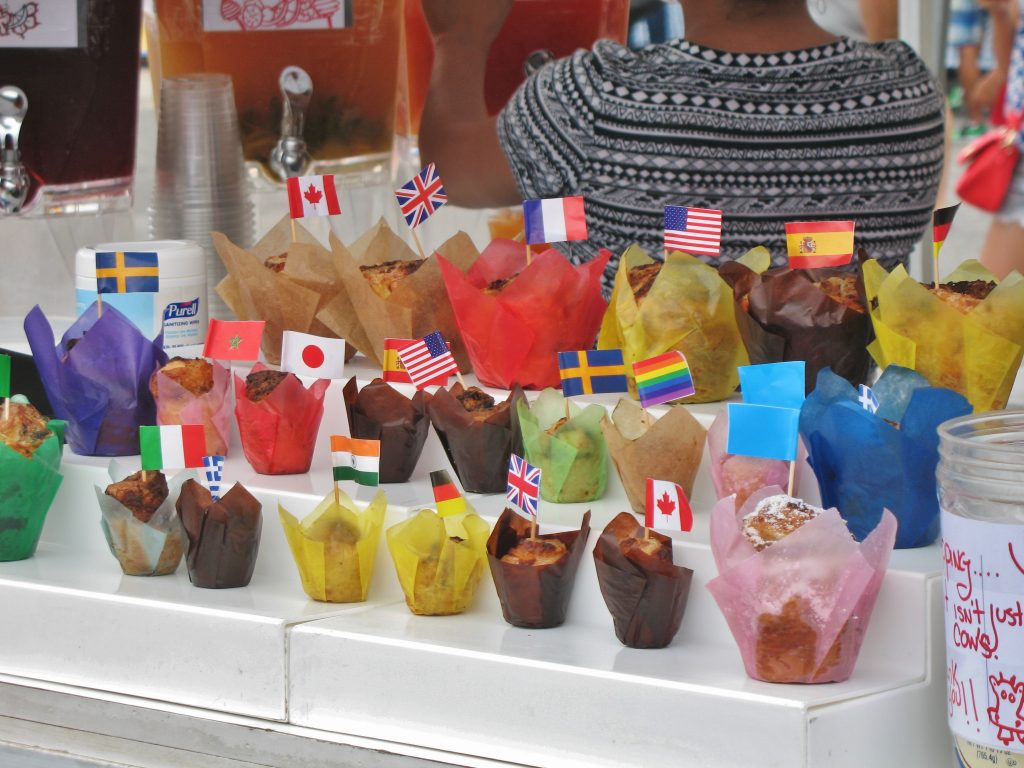 This, my friends, is the Bruffin. Remember the full-meal gum in Charlie in the Chocolate Factory that made the blonde chick turn into a berry? Well, the wonderful people at Bruffin saw potential in that terrifying childhood memory and made it into a pastry. The result is a muffin that, for better or for worse, has the flavours of an entire meal from each country. For example, the Greek bruffin has olives and feta, and the Canadian bruffin contains a combination of bacon (it’s ham) and maple. An interesting idea, but I’m not sure how appealing it would actually be… I mean what did they put in the British one? Haggis?